Hello! As you may have seen in my Updates and Recent Happenings: Costa Rica! post, Joel and I have recently returned from the wonderful Osa Peninsula in Costa Rica. Even though we were there on our honeymoon, we still couldn’t resist the urge to learn as much as possible about all of the awesome tropical permaculture techniques that were happening all around us.

At two places in particular, Finca Morpho and Saladero Eco Lodge, we were able to document some of the tropical permaculture design and infrastructure they had in place. After going through my pictures I feel like I only got a fraction of what these places are doing, so please keep that in mind. 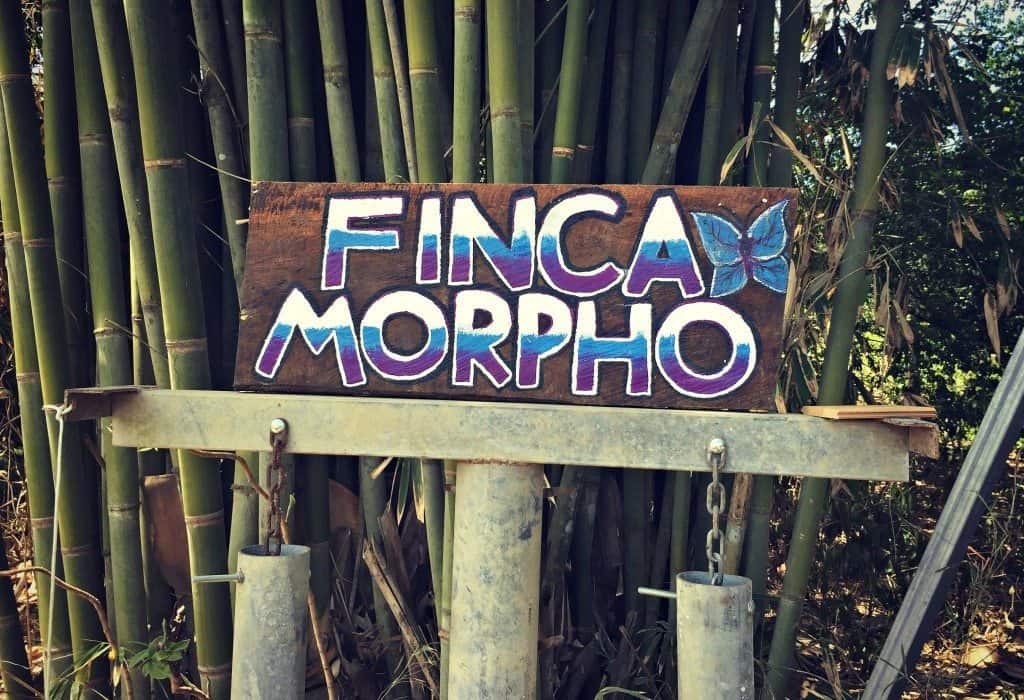 Finca Morpho is partially operated by some of our Yosemite friends, Colton and Stephanie, and we were lucky enough to get the grand tour! We just happened to be staying at an eco lodge about a mile away from them, so we took a hot and humid walk one morning to go visit (we got picked up from a local soon thereafter, so we didn’t have to walk far, thankfully). Running a large scale permaculture farm complete with volunteers and interns is no joke, especially when it’s still in the implementing stages. This is their Productivity List, which helps keep everyone on task. 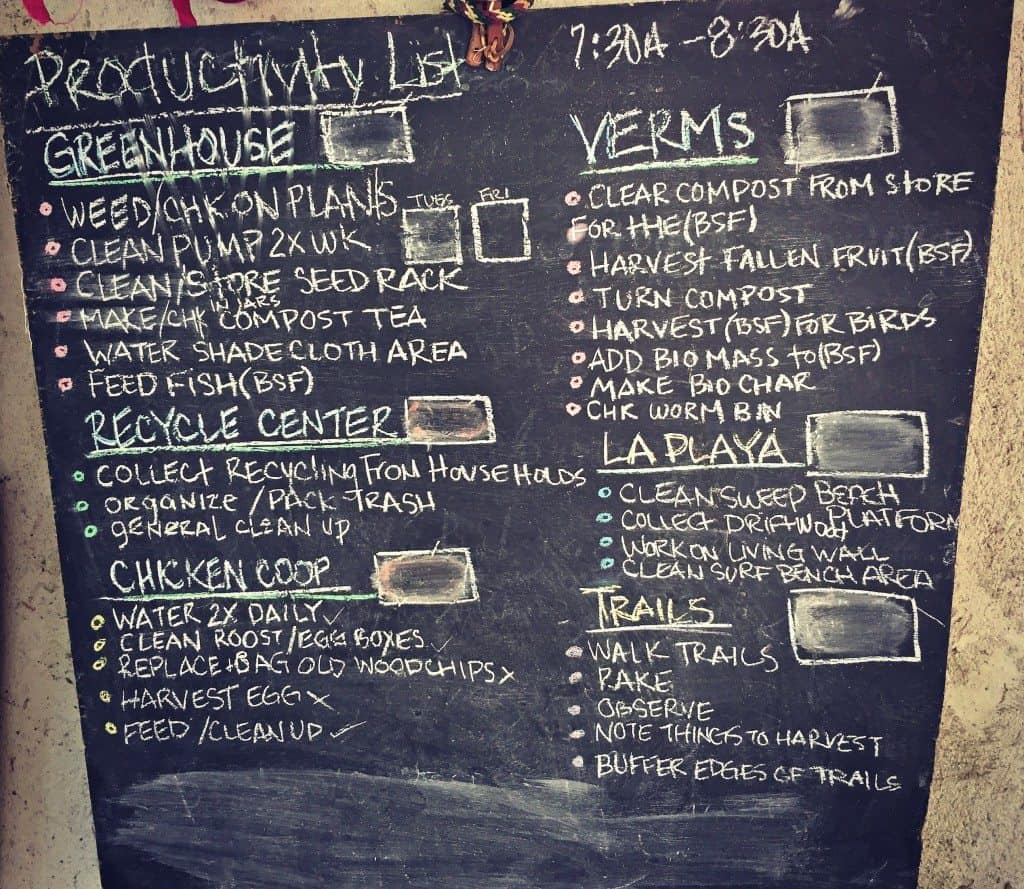 As we started our tour, we noticed some cashews that had recently been roasted. The shells contain a very toxic compound that require them to be put over an open flame before they can be eaten. Hence the high price of cashews! 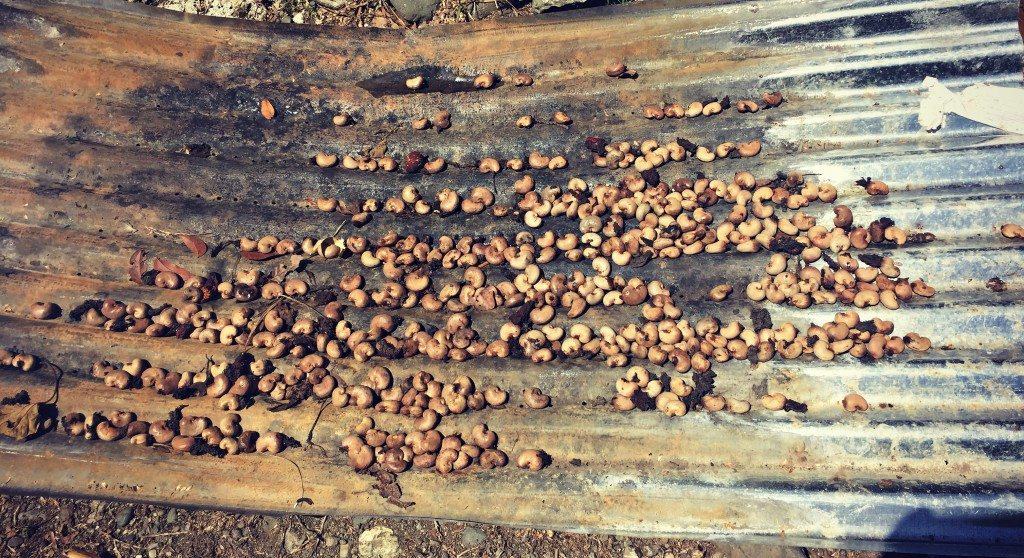 Have you ever seen what a cashew looks like on the tree? It’s the coolest thing ever! 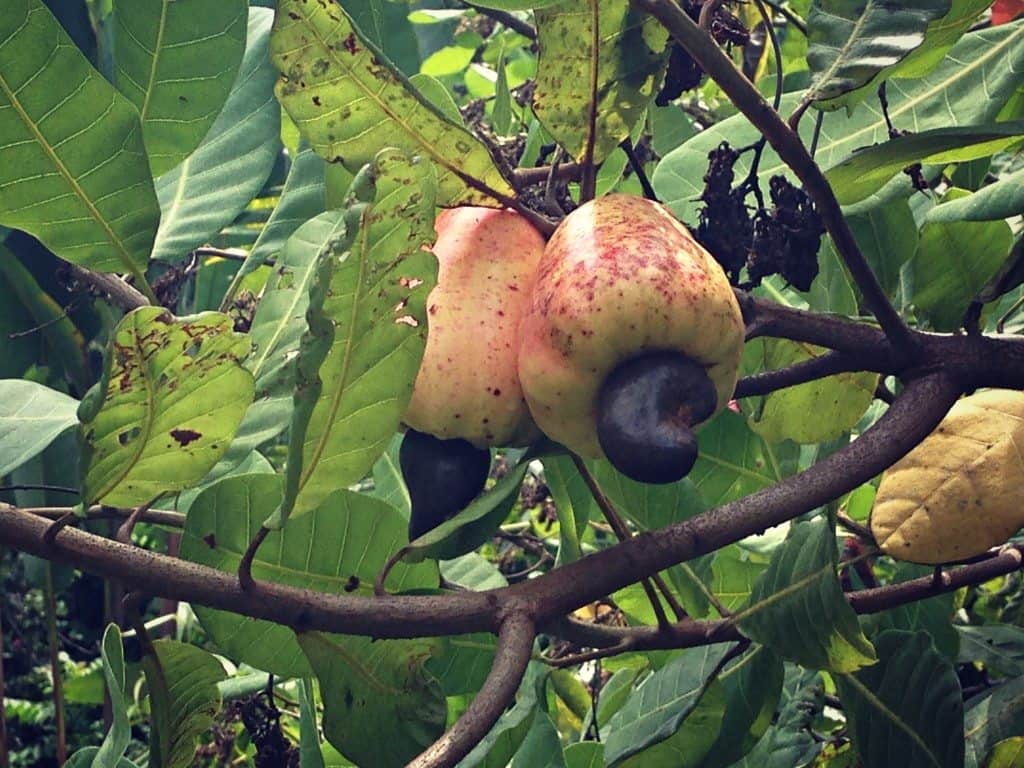 The fruit is called a cashew apple and is edible once it’s completely ripe, although it is an acquired, sort of astringent taste. At another farm we visited, Casa Orquideas, the owners told us that when they first bought the property they made cashew apple wine and roasted cashews, and that’s pretty much what they lived on for their first few seasons when they were totally broke. My kind of people!

Next we moved onto the greenhouse, which is more for protection from the elements for seedlings than a traditional greenhouse, since it’s always warm here.

Inside the greenhouse is a really cool aquaponics system that recycles water from a fish tank into vegetable beds, then back into the tank in a closed loop system. Those huge plants are basil! 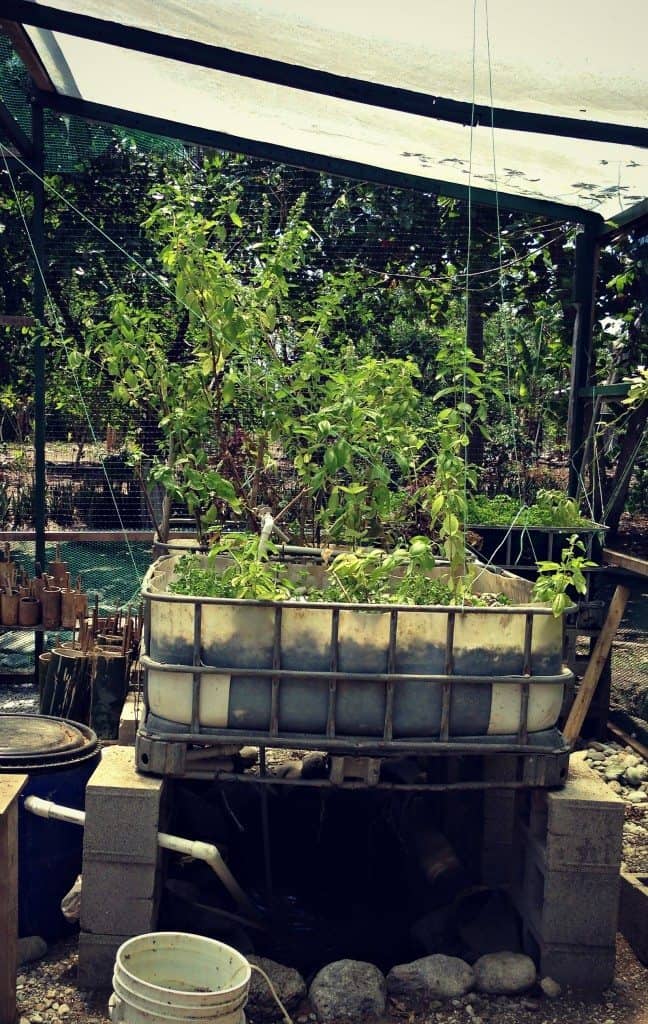 Then we got to see the awesome chicken mansion that Colton built! This thing is huge and is the real deal. Chickens, and their eggs for that matter, really need a lot of protection from predators in the tropics, and this coop does that and keeps them comfortable in the process. They are let out into a bigger fenced area during the day to range. 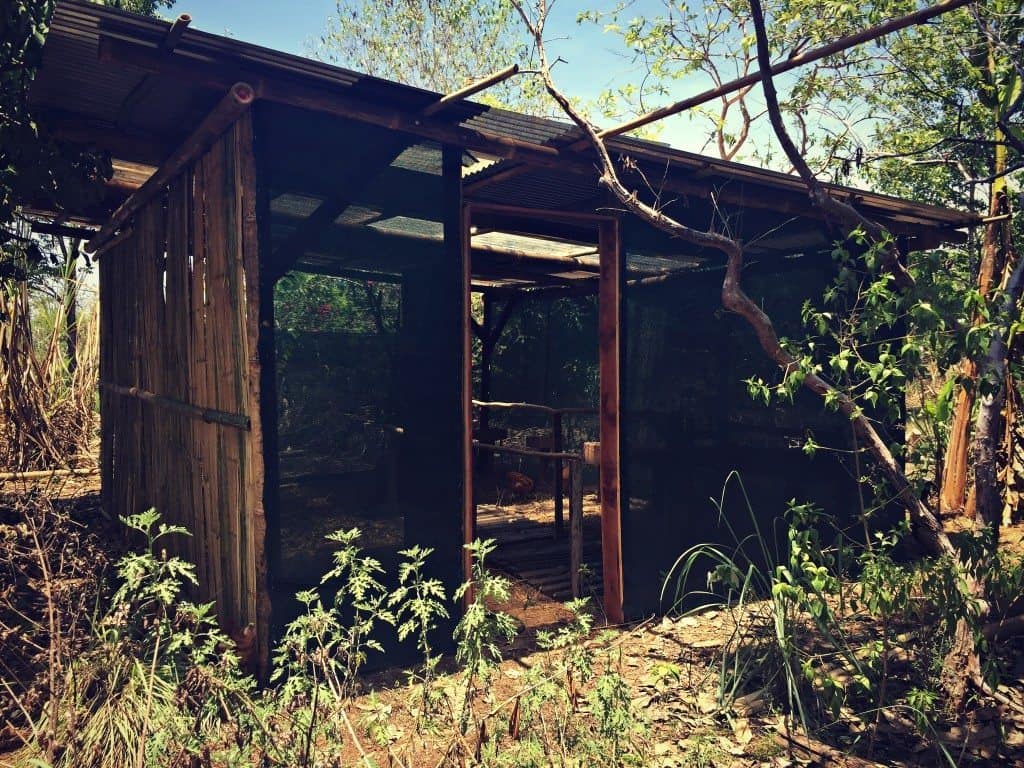 Next we came upon the humanure toilet. What?! Yes, you heard me right, human-manure. A humanure toilet is an effective way of dealing with human waste products and turning them into something actually usable. This method can work anywhere, but is particularly useful in the tropics where the hot and humid temperatures will convert the waste into useable manure in a fairly quick manner. All you do is cover your waste with a scoop or two of wood chips or shavings to keep down the smell, and once the barrel is full you let it sit for a period of time, longer if you’re in a temperate region, and soon enough you have manure. Pretty cool! Plus, it’s always nice to poop with a view. 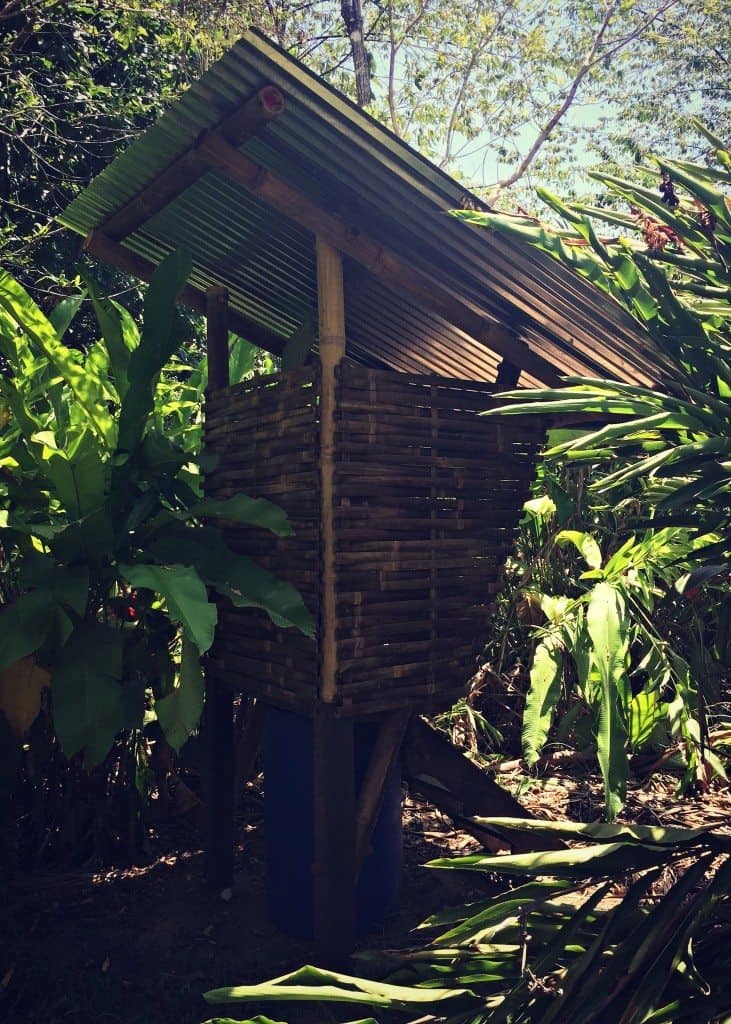 The last thing we saw at Finca Morpho was their trash and recycling area. The idea of “trash bricks” was new to us and we thought it was super cool. Basically any trash that you have, which will probably be mostly plastic if you live on a farm that reduces, reuses, recycles and composts, gets stuffed into plastic bottles until they are completely full. You want them to be packed very tightly. Once you get enough of those they can eventually be used as “bricks” to help build walls in cob or straw bale type homes. Such a great idea! 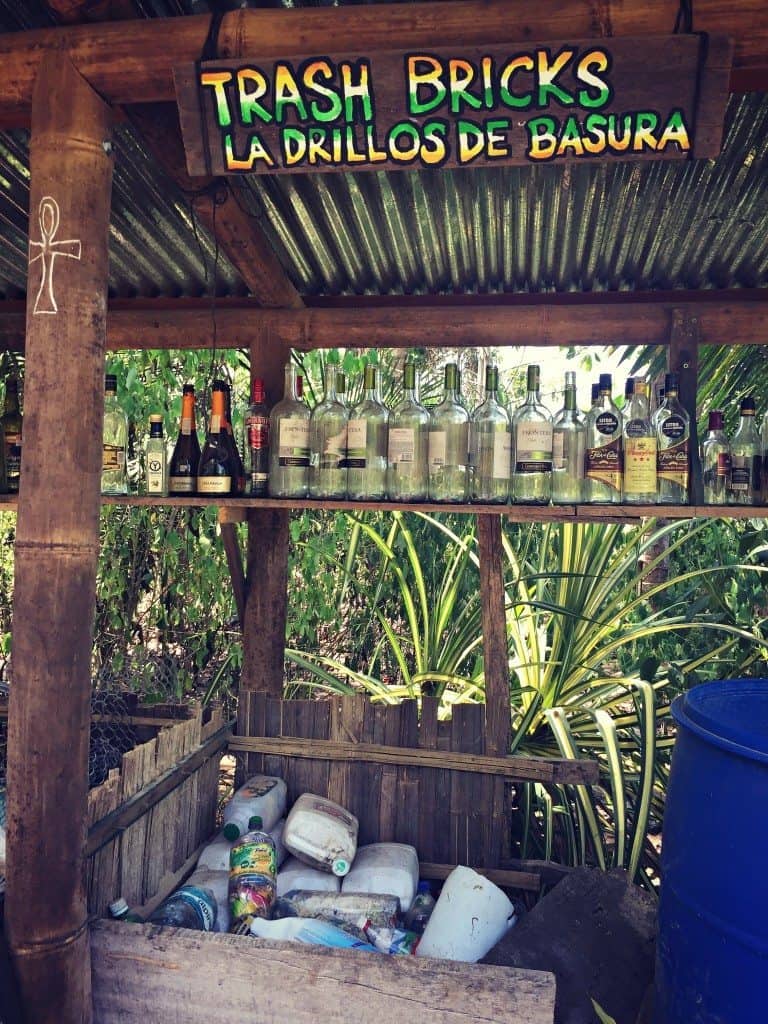 Finca Morpho has so many cool things going on and growing, I really only showed you a portion of it. We were there at the very end of the dry season, so a lot of their plants weren’t in their prime, but they are really set up to have an amazing season this year. I can’t wait to go visit them again someday to see what they’ve accomplished!

Next I have a few cool things to show you from Saladero Eco Lodge. This lodge was only accessible by boat on the northwest shore of the Golfo Dulce. They aren’t a permaculture farm per se, but they do use a lot of permaculture techniques on their beautiful property. They use pineapple plants to make walkways to the cabins, which makes an edible plant extremely useful. It also keeps people from walking under the coconut trees which can be dangerous! 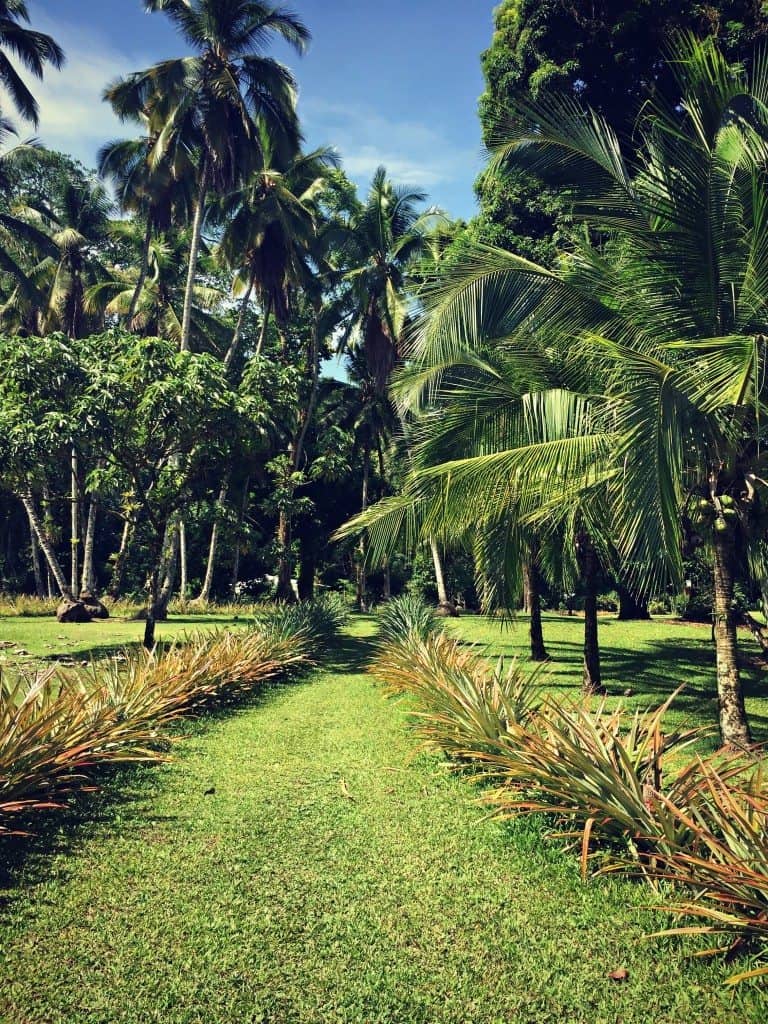 They also have some banana circles, which Finca Morpho were in the process of building as well. This is where you plant multiple banana trees in a circle with a compost pile in the middle. It can have multiple functions including food production, biomass production, a place for greywater and compost materials to go, and wildlife habitat among other things. You can also use papaya or coconut trees in this type of system.

Saladero and Finca Morpho were also growing many really cool permaculture plants, but two I want to show you are yuca (cassava) root and moringa. 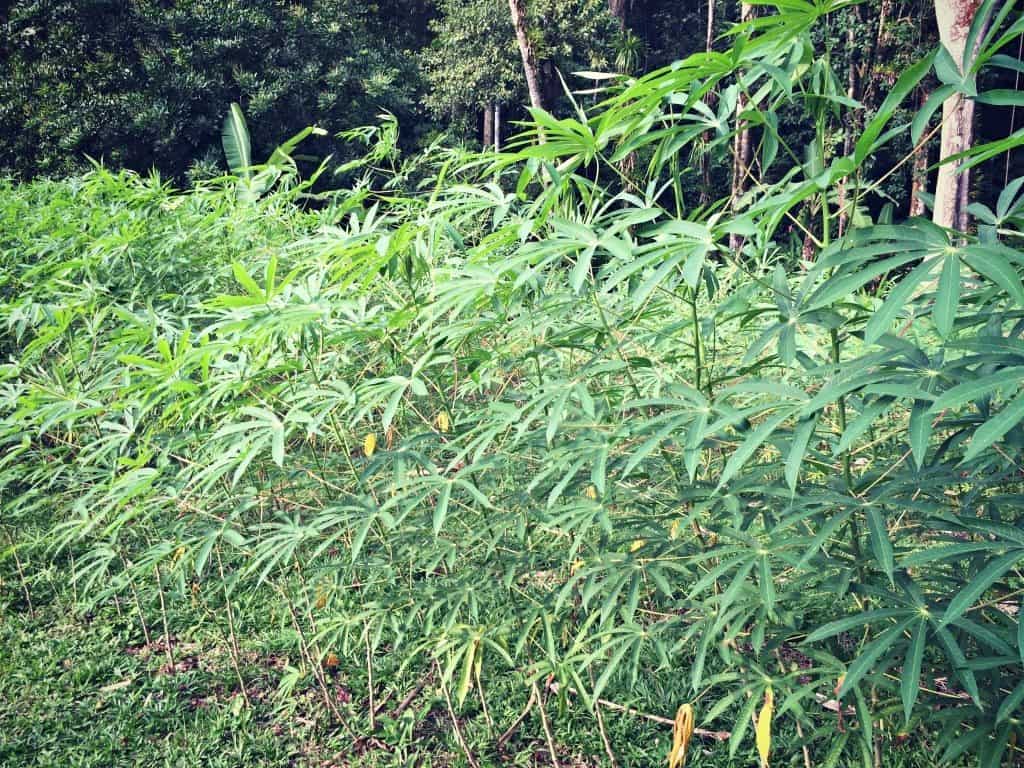 No, this is not a marijuana garden, although I almost thought that it was from a distance for a half a second! This is a patch of yuca root, a staple tuber that is similar to a potato and extremely easy to grow. It is a really important local food source, specifically for carbohydrates.

This next plant is called moringa, which is a highly nutritious plant that some think could end hunger. It is very high in protein, vitamins and minerals and also has medicinal qualities. I guarantee you will be hearing more about this super plant in the future. 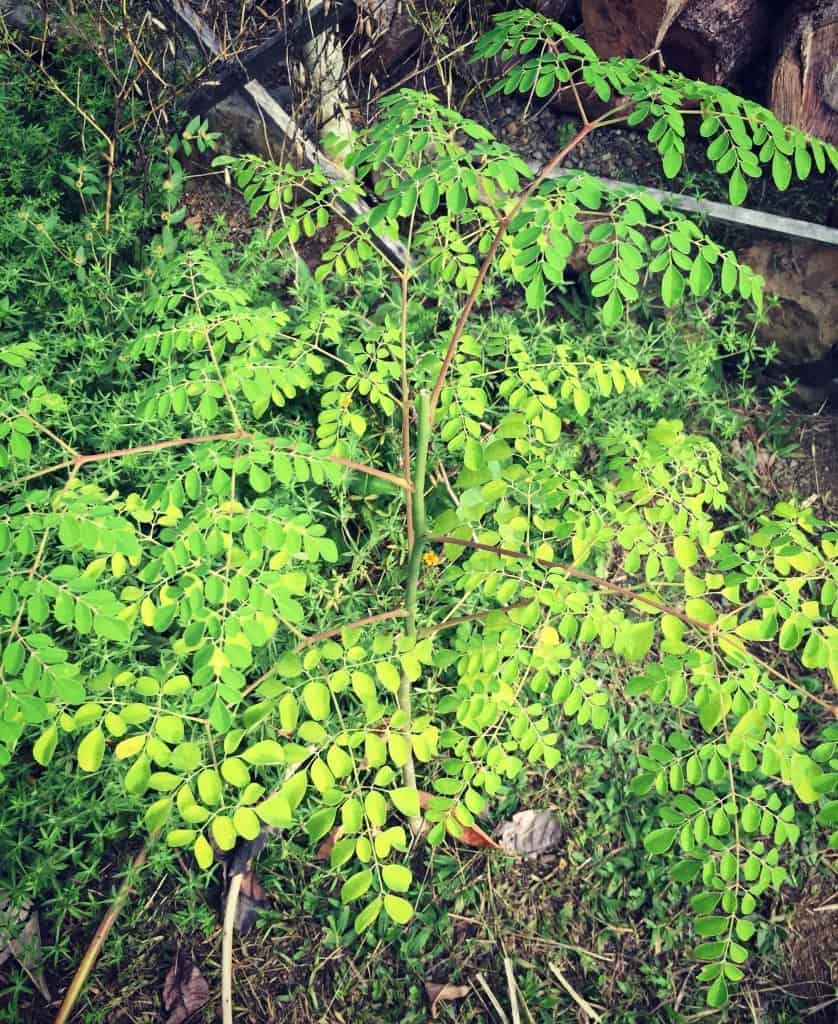 Well, that’s about all that I have for you for now in the world of tropical permaculture. We saw so many amazing things happening in such a little remote corner of Costa Rica, it really gives me hope that the world is accepting permaculture as not only a viable way to design your property, but as a way to live comfortably and fabulously off the grid. As Stephanie from Finca Morpho has been known to say, Permaculture Rocks!!!