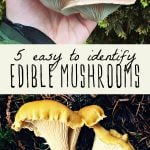 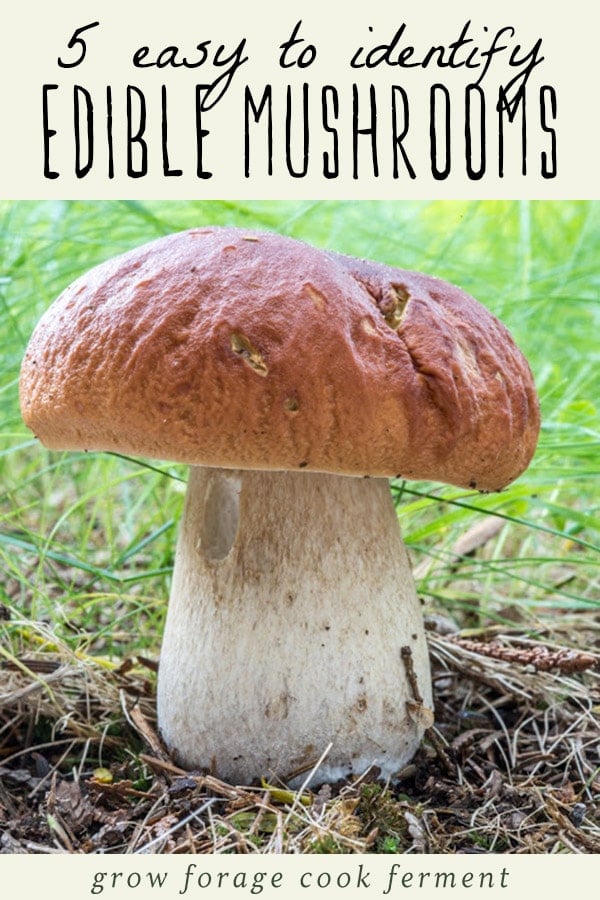 Mushroom hunting can be a bit scary, especially if you’re a beginner. That doesn’t mean that you shouldn’t do it, though. Everyone has to start somewhere!

I always advise that beginners should first start mushroom foraging by simply paying attention. Observe the different mushrooms that you may see, and consult a guidebook as you go along.

Don’t pick or eat any mushroom that you find until you verify what the mushroom is with an experienced mushroom hunter, even if you think you know what it is.

Here are the five varieties of edible mushrooms that I recommend people start with: oysters, morels, boletes, lobster, and chanterelles.

I chose these five because they are relatively easy to identify once you know what to look for, are somewhat common, and are super tasty! 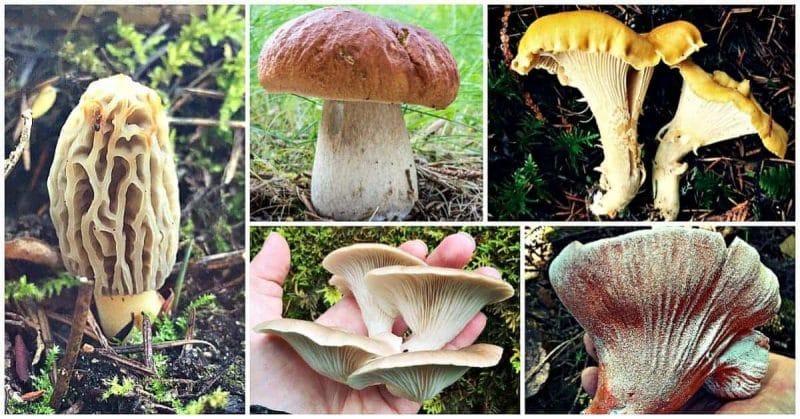 But First! Get a Mushroom Guidebook

The first thing that anyone who is interested in mushroom foraging should do is buy a mushroom identification guidebook.

One of my favorites is All That the Rain Promises and More by David Arora. It has good pictures and great descriptions, while still being small enough to easily carry on the trail.

This Field Guide to North American Mushrooms from the National Audubon Society looks like another great option too.

Before we get into the five easy to identify edible mushrooms, I want to clarify something, and that is…

Mushrooms with Gills are Tricky

Four out of five of these mushrooms do not have regular gills.

This is because mushrooms with gills can be very hard to distinguish from one another, and several of them are poisonous.

In fact, the death cap and destroying angel can kill you with just a couple of bites!

Way better to be safe than sorry.

Oyster mushrooms are the only ones in this group that do have regular gills, and I explain what makes them different below.

As I mentioned, oyster mushrooms are the only mushrooms with gills that I recommend anyone to forage, unless you are a highly skilled mycologist.

This is because oyster mushrooms almost always grow on dead wood, such as trees, stumps, or downed logs.

While they sometimes appear to be growing out of the ground from wood chips or other substrate, I would not trust that they are oysters unless you find them on wood.

Oyster mushrooms grow in shelf like clusters, usually on hardwoods, but sometimes on conifers.

They generally like cooler weather, so spring and fall are the best times to find them. They are quite common, and very tasty!

Read more about oysters in my post Foraging for Oyster Mushrooms. 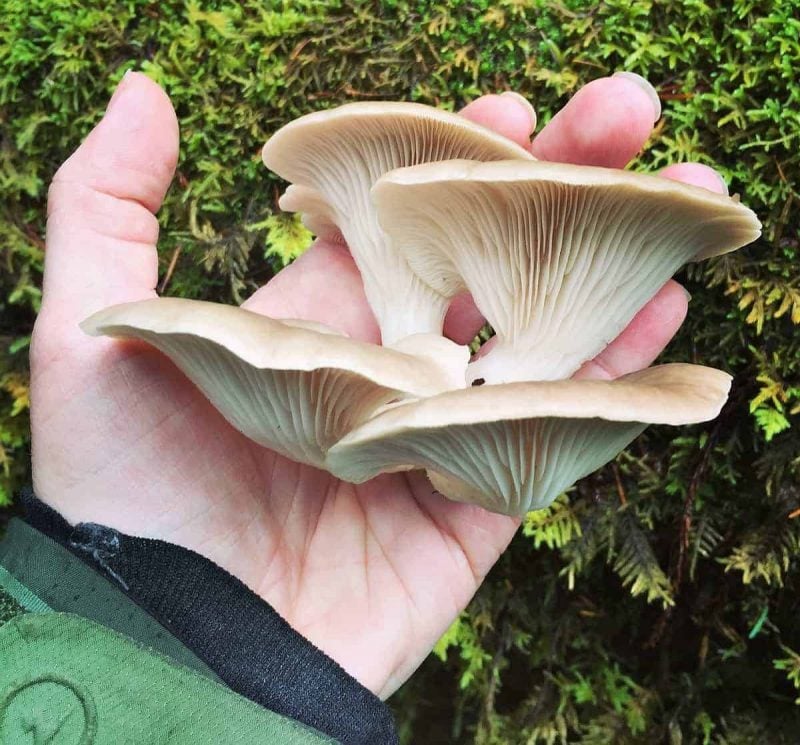 Morel mushrooms are the darling of many edible mushroom hunters, and for good reason! They are fun to forage for, and for some reason when they are found the excitement is huge!

Maybe it’s because they pop up in the springtime and we are all yearning for wild mushrooms by then.

Morels like south facing hillsides and are typically found in sunny patches. They also commonly come up in areas that have been recently burned.

They are one of the easier mushrooms to identify, as nothing looks quite like them.

Morel mushrooms have a pitted and deeply ridged, honeycomb like cap, and are completely hollow when cut in half.

Morel mushrooms need to be cooked before eaten.

There are some mushrooms that are called “false morels” that are somewhat similar in resemblance, but they are not hollow. They are not so toxic as to kill you with only a few bites, but they can definitely cause a lot of gastric distress.

Read more about morels in my post Foraging for Morel Mushrooms. 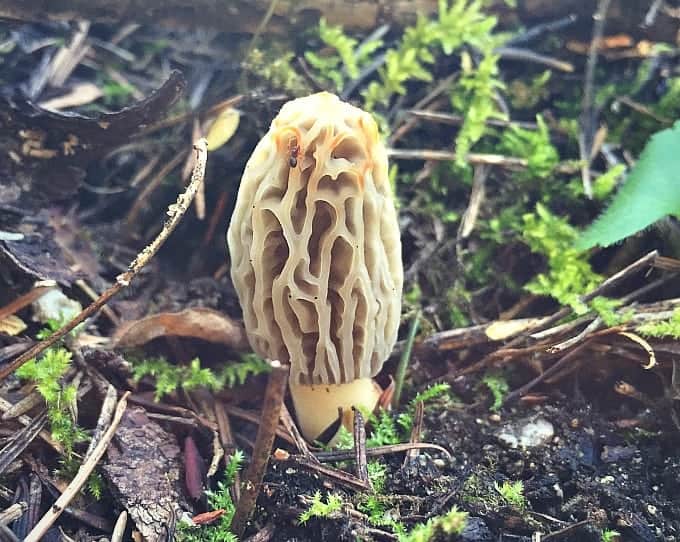 Bolete mushrooms are fun to find, and there are several tasty varieties.

King boletes (Boletus edulis) are also known as porcini mushrooms, which are possibly the tastiest of them all!

Boletes will usually show up in late spring, summer, or fall, depending on your location. We found many boletes during the summertime in the high sierras.

Boletes do not have gills under their cap, but rather a yellow or brownish spongy surface of pores.

The stem is usually quite thick and can sometimes be bulbous. There are often worms or maggots in boletes, so give them a once over before throwing them in the pan!

There are many species of boletes, and be aware that a few are toxic. Some of the toxic varieties will turn blue when cut or bruised, and many of them also have a spongy surface of pores that is red in color.

Here is a great post showing many varieties of boletes from The 3 Foragers. 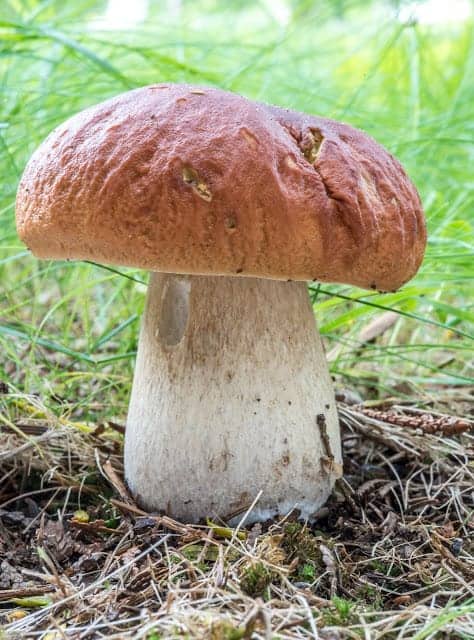 King bolete mushroom (photo by Karen Kraczewski of The 3 Foragers)

Lobster mushrooms are cool because they actually aren’t mushrooms at all. Instead, they are a fungus that grows on certain species of mushrooms, engulfing its host.

They are especially common in the Pacific Northwest, and they are quite unmistakable once found!

Lobster mushrooms have a hard red to orange exterior and a white interior, thus resembling a lobster.

The best part about lobster mushrooms is that there are no poisonous look-alikes at all!

Read more about lobsters in my post Foraging for Lobster Mushrooms. 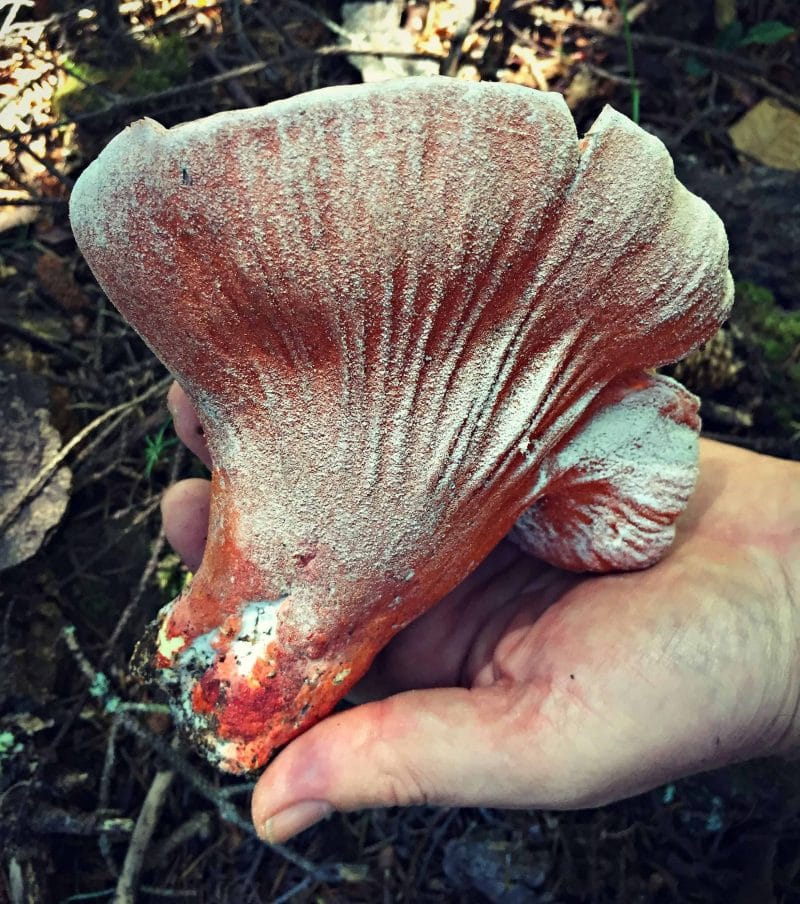 Chanterelle mushrooms are perhaps my favorite mushrooms to forage. While finding any wild edible mushroom is exciting, I get an extra little charge from chanterelles. They are beautiful and delectable!

They are typically found in the fall after the first rains, but in some areas with higher humidity they can be found throughout the summer.

Chanterelle mushrooms are yellow to orange in color, and have blunt ridges that fork and run down the stem rather than true gills.

The stems are solid, the flesh is white, and they have a fruity aroma.

There is another variety of chanterelles that are similar in appearance, but have hollow stems. They are called winter or yellowfoot chanterelles.

There are two possible chanterelle look alikes that are poisonous, the jack-o’-lantern and false chanterelle.

Both of these have true gills rather than blunt ridges, so that is key to properly distinguishing a true chanterelle.

Read more about chanterelles in my post Foraging for Chanterelle Mushrooms.

Well, there you have it! Five easy to identify edible mushrooms, perfect for the beginning mushroom forager.

Please consult your guidebooks, go with an experienced mushroom hunter, and start foraging!