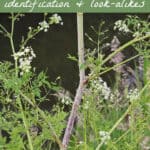 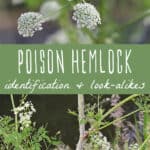 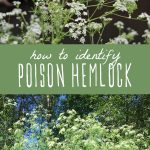 When out foraging for edible and medicinal plants, it is just as important—if not more so—to know how to identify the poisonous plants that grow in your region. Poison hemlock (Conium maculatum) is one of those that everyone should know how to identify, as it can be quite prolific in some areas. 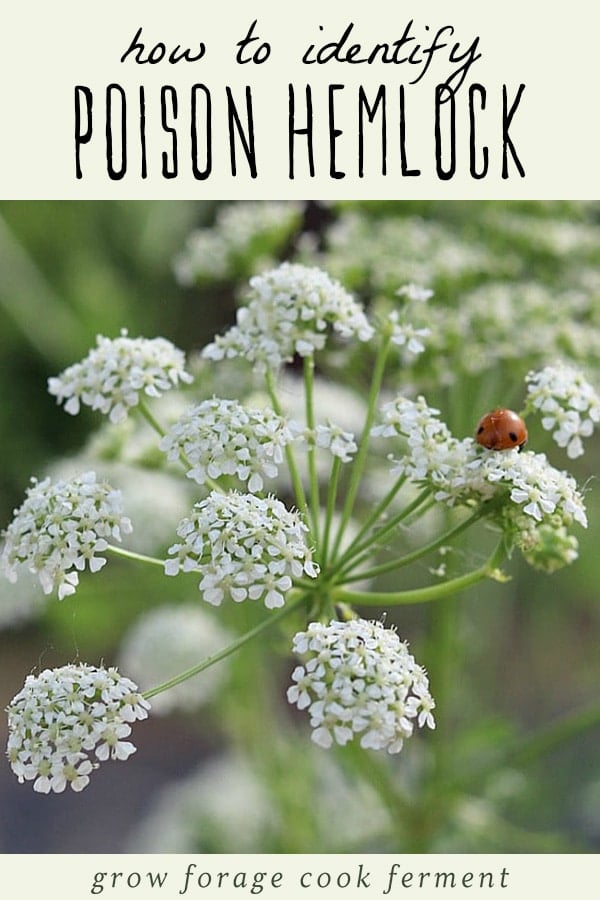 Poison hemlock (Conium maculatum) is in the Apiaceae family, which also includes carrots, parsnips, parsley, fennel, and their wild counterparts.

It is an herbaceous biennial plant that can grow 5 to 10 feet (2-3 meters) tall or even taller.

It should not be confused with hemlock the coniferous tree which is completely harmless (and edible).

All parts of the plant are poisonous, including the flowers, leaves, stems, roots, and seeds.

Poison hemlock contains potent toxic alkaloids that affect the nervous system, and even small internal doses can cause respiratory collapse and death.

It can also cause a severe skin reaction similar to a burn when touched externally. Definitely not a plant to mess around with!

Historically poison hemlock was used in ancient Greece to poison condemned prisoners, and it was what killed Socrates after he drank a potent hemlock infusion.

First: Get a Foraging Guidebook

To the untrained eye poison hemlock can sometimes be confused for some popular foraging plants such as Queen Anne’s lace, yarrow, wild fennel, and elderflower.

Before doing any foraging or wildcrafting, especially for plants that may resemble poison hemlock, it’s extremely important to get a foraging guidebook. Here are a few of my favorites:

Where Does Poison Hemlock Grow?

Poison hemlock (Conium maculatum) is native to Europe and North Africa, but has widely naturalized in many other areas. It is found in almost every state in the United States, and in most Canadian provinces.

This USDA map shows generally where it is found in North America, and here is a more detailed map that shows which US counties it is found in.

I didn’t find any distribution maps for other countries, but poison hemlock does also grow in Europe, North Africa, Asia, Australia, and New Zealand.

Poison hemlock naturalizes very easily and can be found growing in disturbed areas, along roadsides and trails, and in damp areas along streams.

In our region I find it alongside bike paths, near park edges and fields, and in dense colonies near the freeway.

If you happen to find poison hemlock in or near your yard it is advised to properly remove it as soon as possible, especially if there are children around. 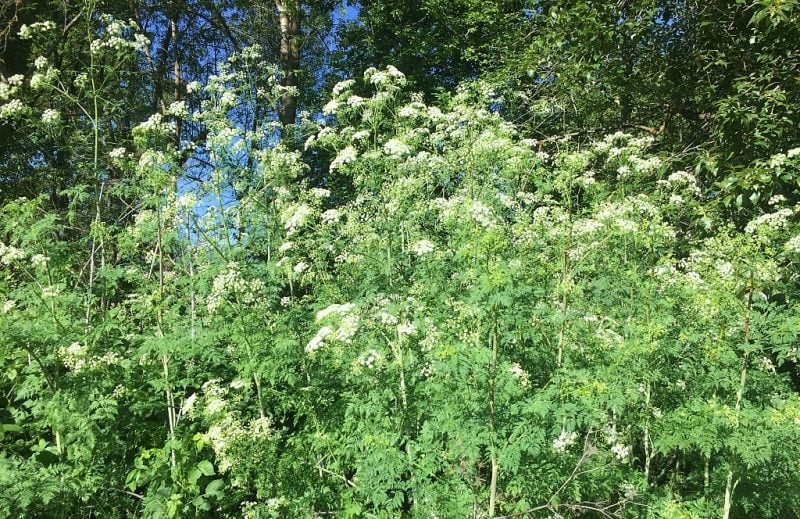 How to Identify Poison Hemlock

Poison hemlock really isn’t hard to identify, and there are a few key identification features to be on the lookout for.

The most important identification feature of poison hemlock are the stems and stalks.

Poison hemlock stems are hairless, hollow, and almost always have distinctive purplish-red splotching or streaking on them, especially towards the base of the plant.

These purple or reddish colored markings are a sure giveaway that it is poison hemlock.

Regardless, it’s always a good idea to know more than one identification feature, especially when dealing with poisonous plants. 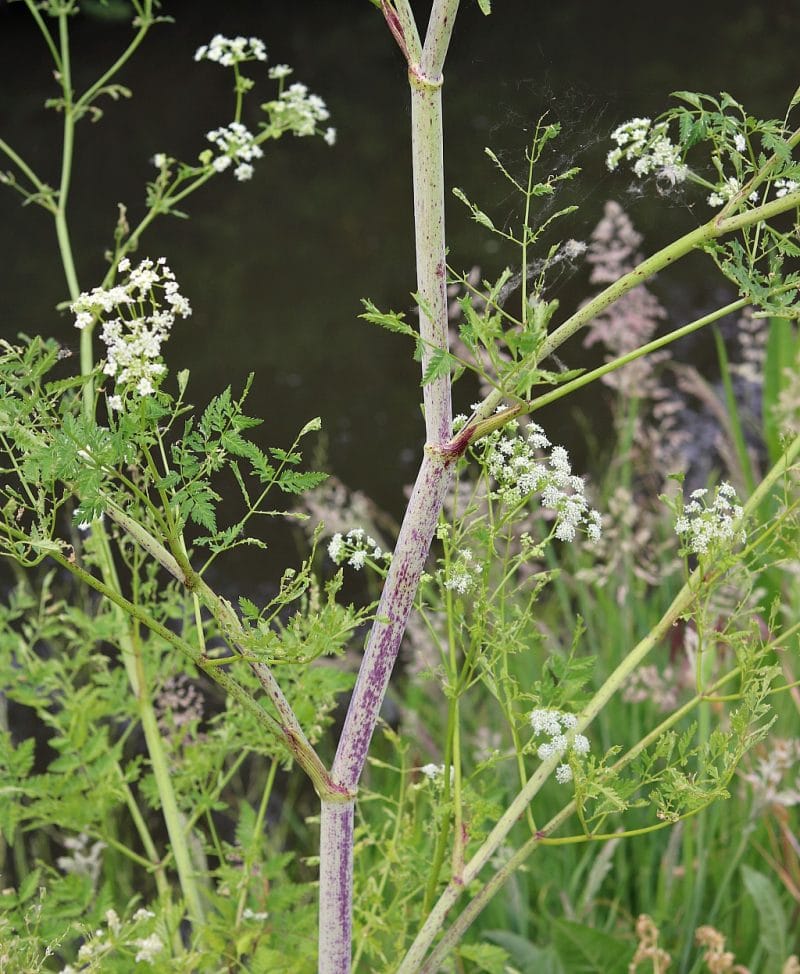 Poison hemlock flowers can be confusing because they resemble other white umbel shaped flowers, especially those in the Apiaceae family.

The flowers bloom in late spring and grow in rounded clusters that are called compound umbels. Each individual tiny flower has five petals. 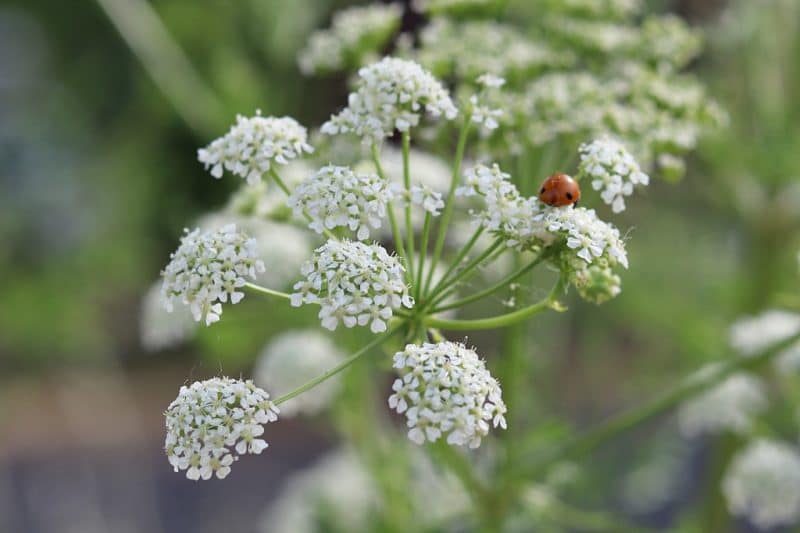 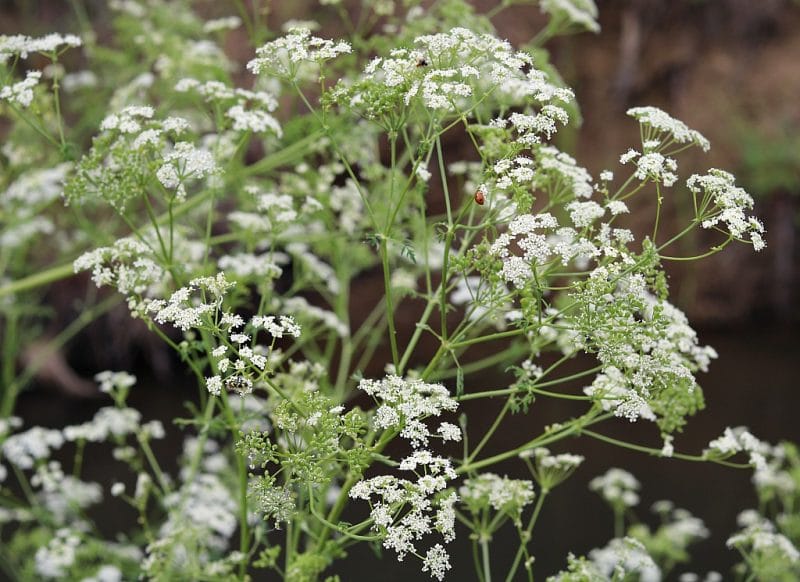 Poison hemlock flowers grow on highly branched stalks that can grow up to 8-10 feet (3 meters) tall. 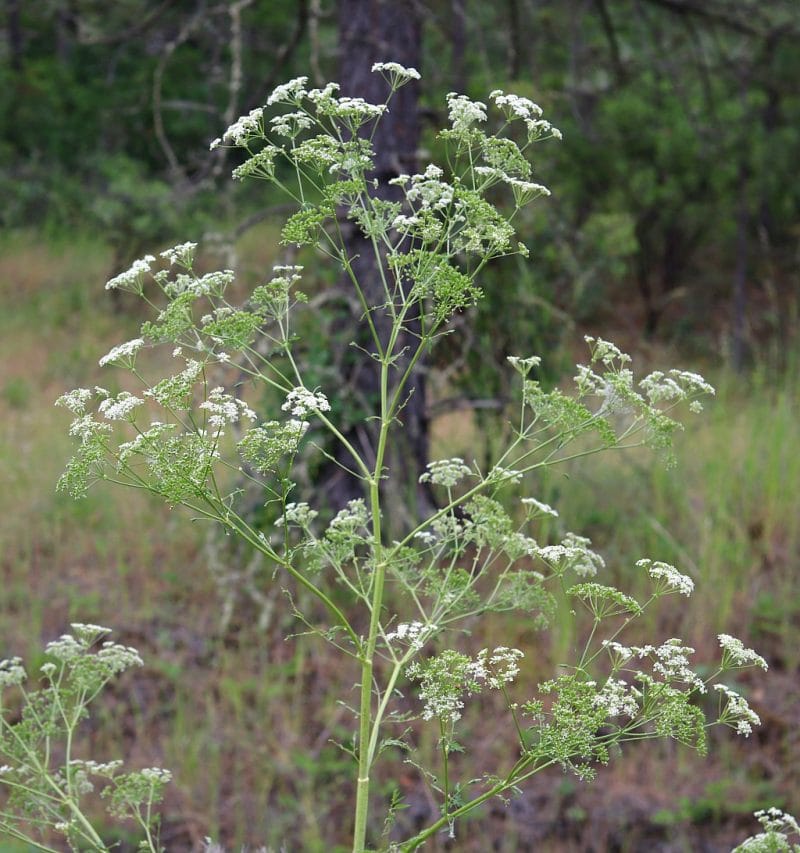 The leaves of poison hemlock look very similar to parsley, chervil, and wild carrot (Queen Anne’s lace), which makes them difficult to distinguish.

They are opposite and compound, hairless, lacy, and triangular in shape.

When crushed or brushed against, the leaves emit a very unpleasant musty smell, not at all carrot-like like Queen Anne’s lace. 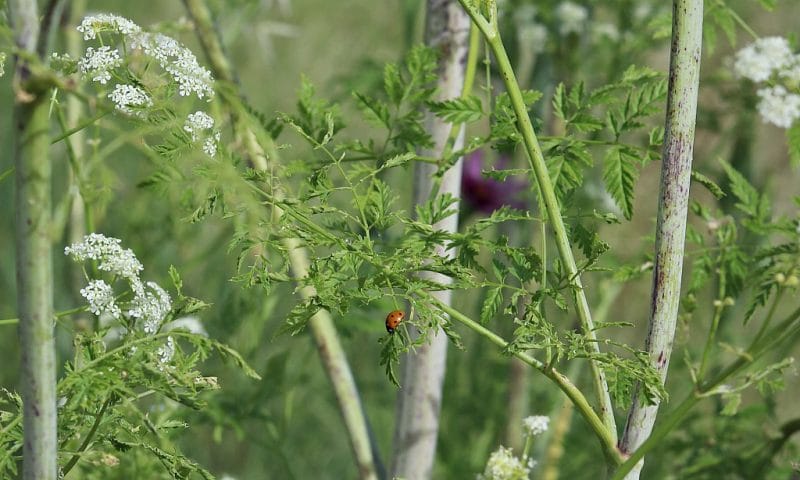 The reason it’s so important to learn how to identify poison hemlock (Conium maculatum) is because it is often mistaken for other plants that are edible and medicinal, most notably Queen Anne’s lace.

Here I will explain the major differences between the edible and medicinal plants that poison hemlock can potentially look similar to.

There are several differences here to consider.

First is overall size, as Queen Anne’s lace only grows to about 2-3 feet in size.

Queen Anne’s lace has hairy stems and leaves, while poison hemlock’s are smooth. Here is one easy way to remember it: “the Queen has hairy legs.”

Queen Anne’s lace flowers bloom later in the summer and have a flatter shape. They typically have a single dark purple or red flower in the center.

Queen Anne’s lace also has 3 pronged bracts at the base of the flowers, and the older flowers curl up into a bird’s nest shape. 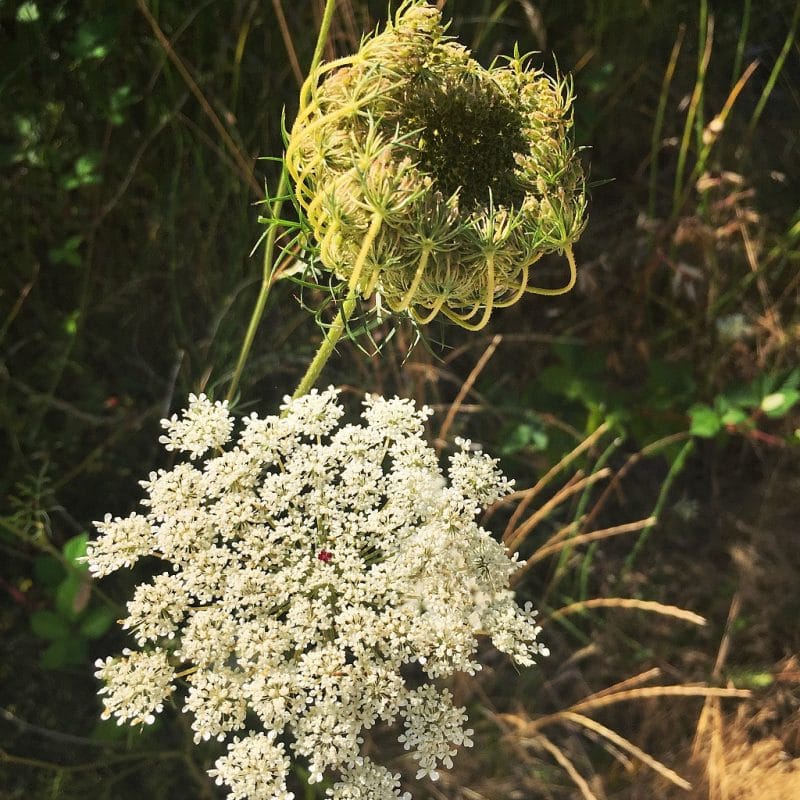 The biggest difference that yarrow has from poison hemlock is its distinctive frilly, feather-like leaves. You can see pictures of the leaves in my post about foraging yarrow.

The flowers also look a bit different, as yarrow is not in the Apiaceae family so does not have a true umbel flower.

Yarrow is also a smaller plant, growing to about 2-3 feet in size.

Angelica has similar looking flowers to poison hemlock, although even more rounded and sometimes light green in color.

The leaves of angelica are much larger and are compound with dozens of leaflets. There is also a sheathing base where the leaf meets the stem.

Perhaps the most noticeable feature of angelica is its pleasantly fragrant scent.

Angelica can also look very similar to water hemlock (Cicuta spp.), which is another highly poisonous species that can cause death.

The flowers of cow parsnip are similar to poison hemlock, but much larger, and same goes for the leaves.

It can also closely resemble water hemlock, so be absolutely certain of your identification.

Cow parsley has pink stems that are slightly hairy and have a groove.

Be aware that it can also closely resemble fool’s parsley, another poisonous plant.

Wild parsnip has yellow flowers and the stem is grooved.

Be aware that while this plant has edible roots, the leaves and stems can cause burns and blisters on the skin after touching.

Water parsnip grows in marshes and wet areas, and the leaves are not lacy like poison hemlock.

I highly recommend using the book Incredible Wild Edibles by Samual Thayer for identifying this species.

Water parsnip looks very similar to water hemlock, another deadly plant, so great care should be taken to obtain positive identification before harvesting.

Wild fennel has a similar overall structure to poison hemlock.

The main differences is that wild fennel has yellow flowers, frond like leaves, and smells strongly of fennel or anise (a licorice-like scent).

There is only one minor similarity that elderflowers might have to poison hemlock, and that is the white flowers.

Elderflowers do not have the true umbel shape and are usually much larger. They turn into elderberries as the summer progresses into fall.

The elder plant itself is more of a large tree-like shrub and doesn’t really bear any resemblance to poison hemlock.

It’s also worth mentioning that there are three other poisonous plants that are also in the Apiaceae family that look somewhat similar to poison hemlock and the other plants I listed above.

Apiaceae can be a tricky family to identify, especially when there are several poisonous species to worry about. Poison hemlock really isn’t hard to identify once you know what to look for.

This guide is here help you learn all of the features of poison hemlock and its look-alikes so that you can feel more confident in your foraging adventures!