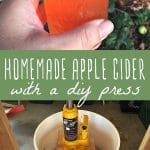 Learn how to make apple cider from scratch with apples from your tree! Homemade apple cider with a DIY cider press is easier to make than you might think. 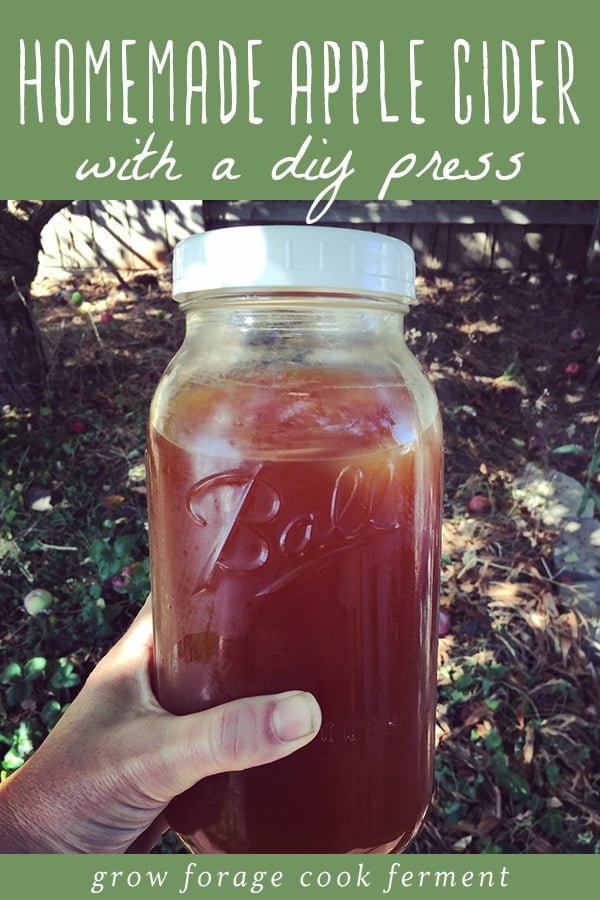 When we moved into our new house, one of the most exciting things for us was the apple tree in the backyard.

While our yard is much smaller than we would like, this apple tree is the centerpiece that ties it all together and really makes it feel like a mini homestead. Well, that and the chicken coop, of course!

Since our house had been unoccupied for several months before we moved in, the tree was in serious need of some pruning, but it was the wrong time of year for that. So, we just let it go, thinning the apples as much as we could to hopefully avoid disaster.

Combine that with a good amount of rain this past winter (finally!), and we got an apple tree that was absolutely loaded with fruit!

The amount of downed apples we had was piling up, and we could only compost so many, so Joel found some easy plans for a DIY cider press.

The next step was to learn how to make apple cider with the press, and it turns out it’s pretty easy… and makes the best apple cider I’ve ever tasted! 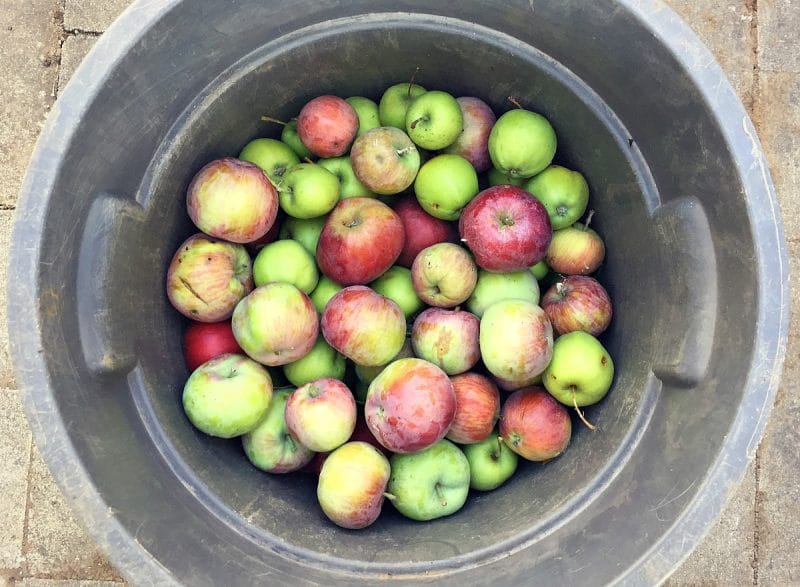 I am not going to go over the building of the press here, because we literally followed the exactly.

They have since taken down the post, unfortunately, but the design is originally from the book Practical Projects for Self-Sufficiency by Chris Peterson.

There are great diagrams in the book that I can’t really copy here, so I urge you to purchase the book if you’d like to build this same press. It was cheap and relatively easy to make.

That said, you can use my instructions here for making apple cider with just about any homemade DIY cider press.

How to Make Apple Cider with a DIY Press

The first step is to collect a bunch of apples.

We usually collect and process a five gallon bucket worth of downed apples at a time.

It’s ok if the apples are bruised, as most of them will be if they have fallen, but you do want to make sure that they aren’t totally rotten. Send those ones to the compost bin.

We do not know the variety of our tree, but we have discovered that it has been grafted with two types, one red and one green.

The reds are sweeter and the greens more tart, which I think makes a nice balance of flavors. But honestly, any fresh pressed juice from most varieties will be amazing!

The very first thing that you want to do is make sure that every item that will be touching your apples and juice is cleaned very thoroughly. You may even want to use some kind of sanitizer for this.

Give your apples a good rinse, then roughly chop them. Joel uses a cleaver because he’s cool like that, but any big knife will do. 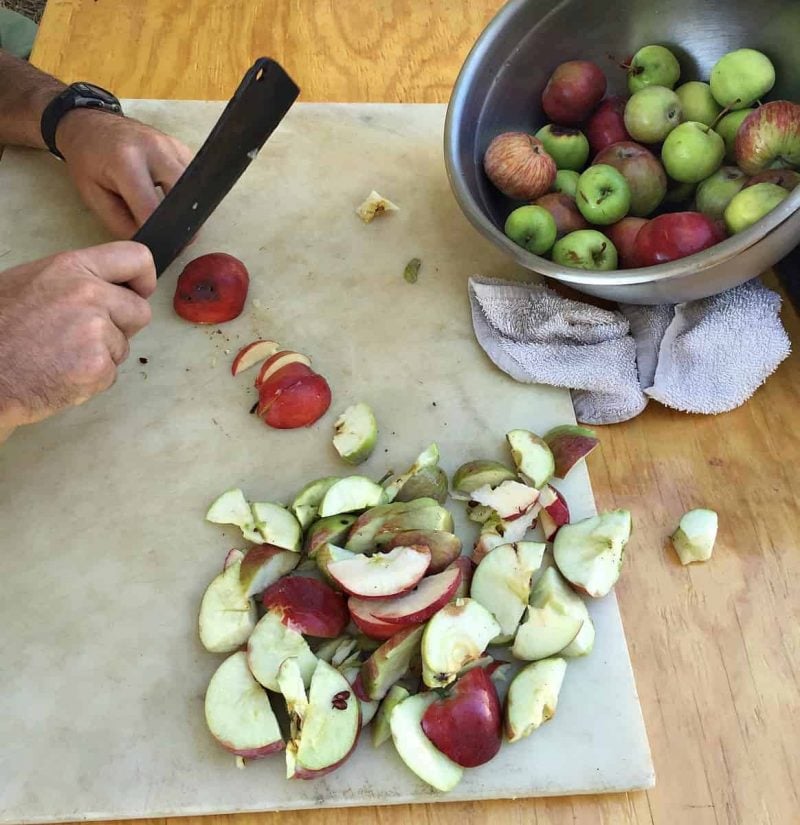 Then, put the chopped apples into a bucket or bin of some sort and give them a good mashing with a wide pole or post. The wider the better. It worked better for us to do this in smaller batches. 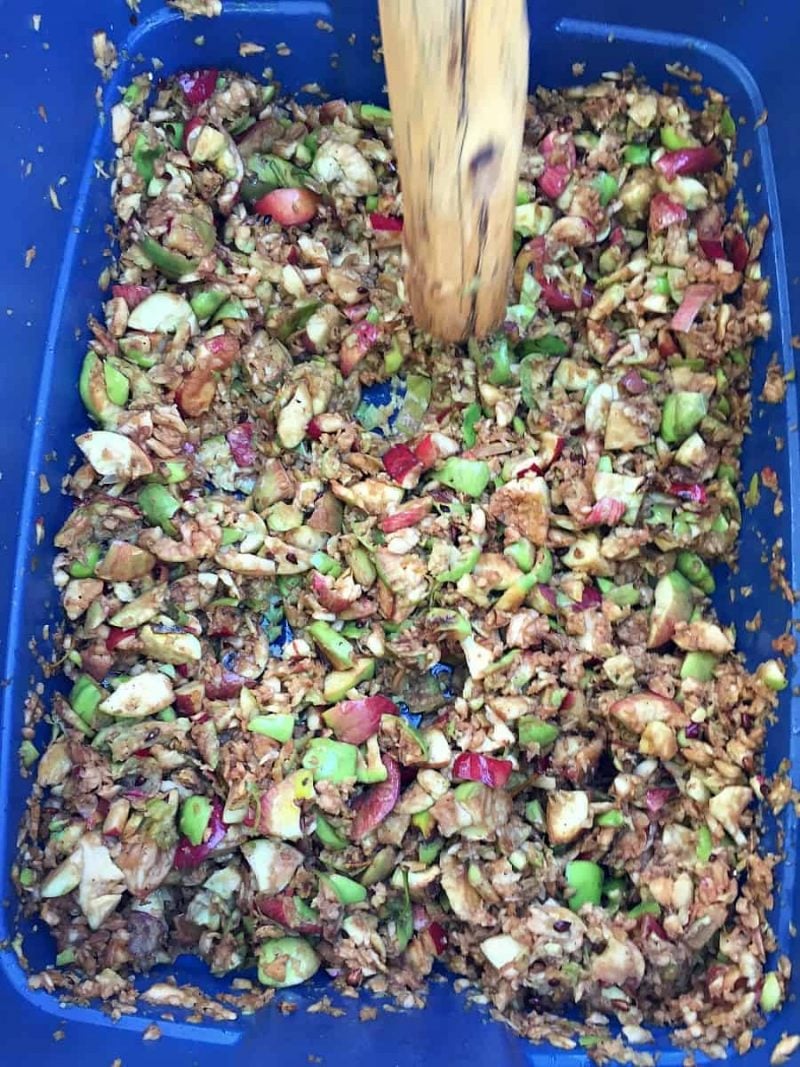 Once they are good and smashed, put them into the holey bucket (or equivalent part on your press) lined with something to strain out all the smaller stuff. We used a clean pillowcase. 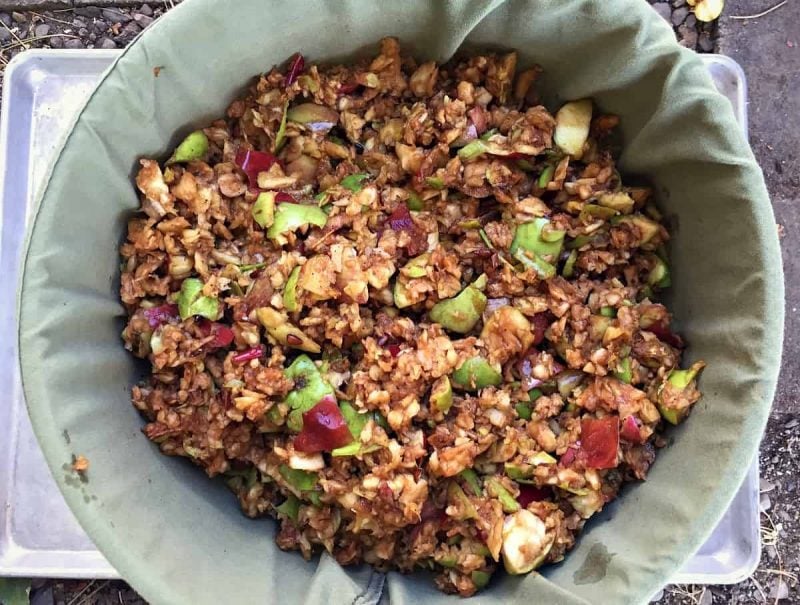 Put that bucket on a metal pan that has holes drilled into it, and put that whole thing onto the base of your press.

Put the other 5 gallon bucket under the holes in the pan. Fold the pillowcase over the apple mash and put the round wooden piece on top. 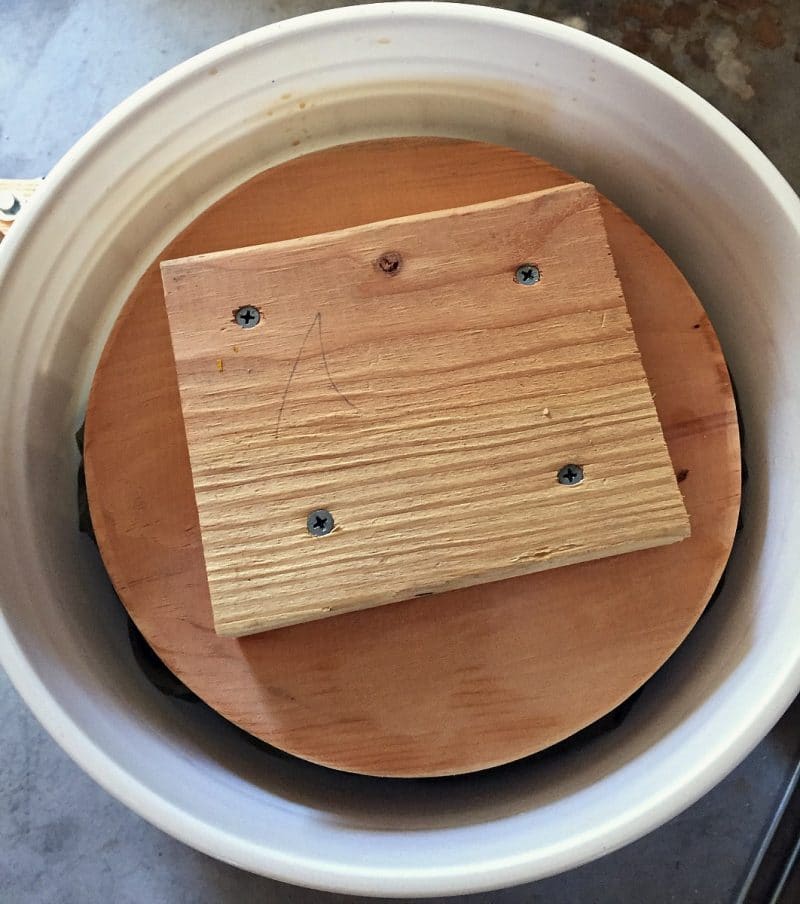 Fit the jack between the wooden block and the top of the press frame, adding more wooden blocks as necessary.

It’s helpful to put a strong piece of metal in between the jack and the press frame so that it doesn’t indent the frame. 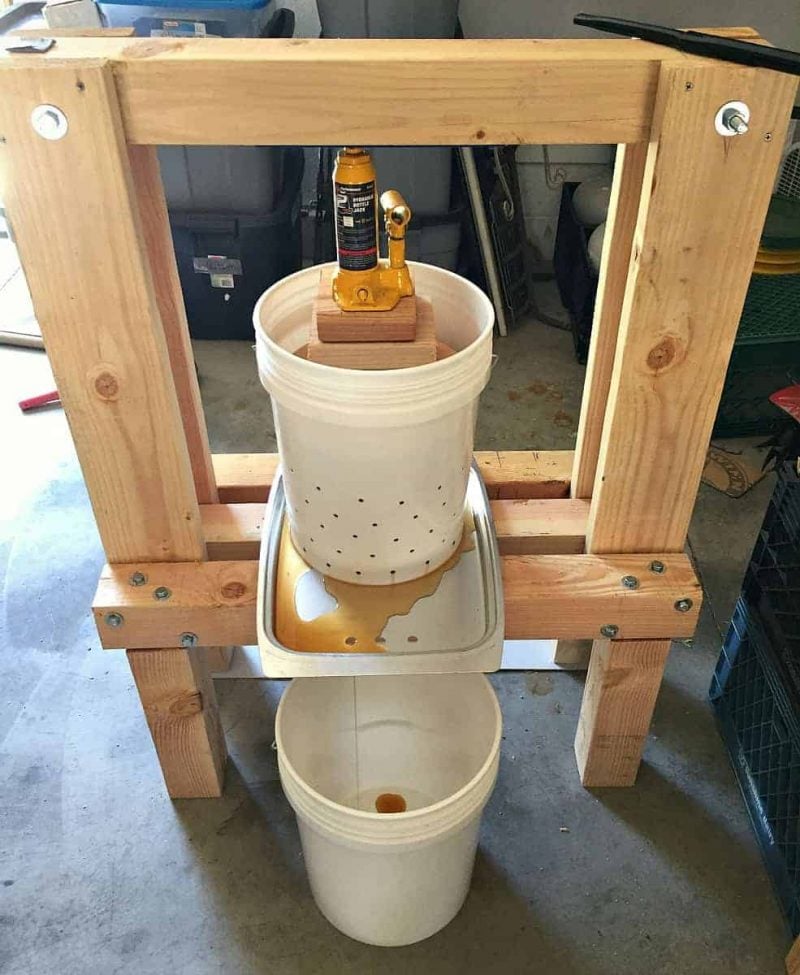 Then pump the jack and watch the cider really start to flow! You can see a video of this in action on my Instagram page.

Once the jack is maxed out, add more blocks underneath it and repeat the process. 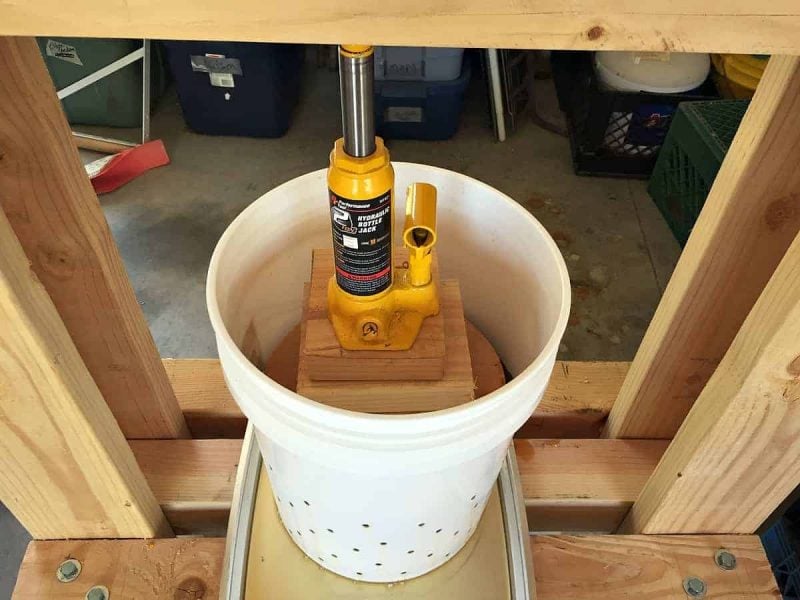 You may have to let it sit for a while as it slowly presses out the last of the juice.

This homemade apple press works so awesome! We got a little more than 1 gallon of juice from 5 gallons of apples. 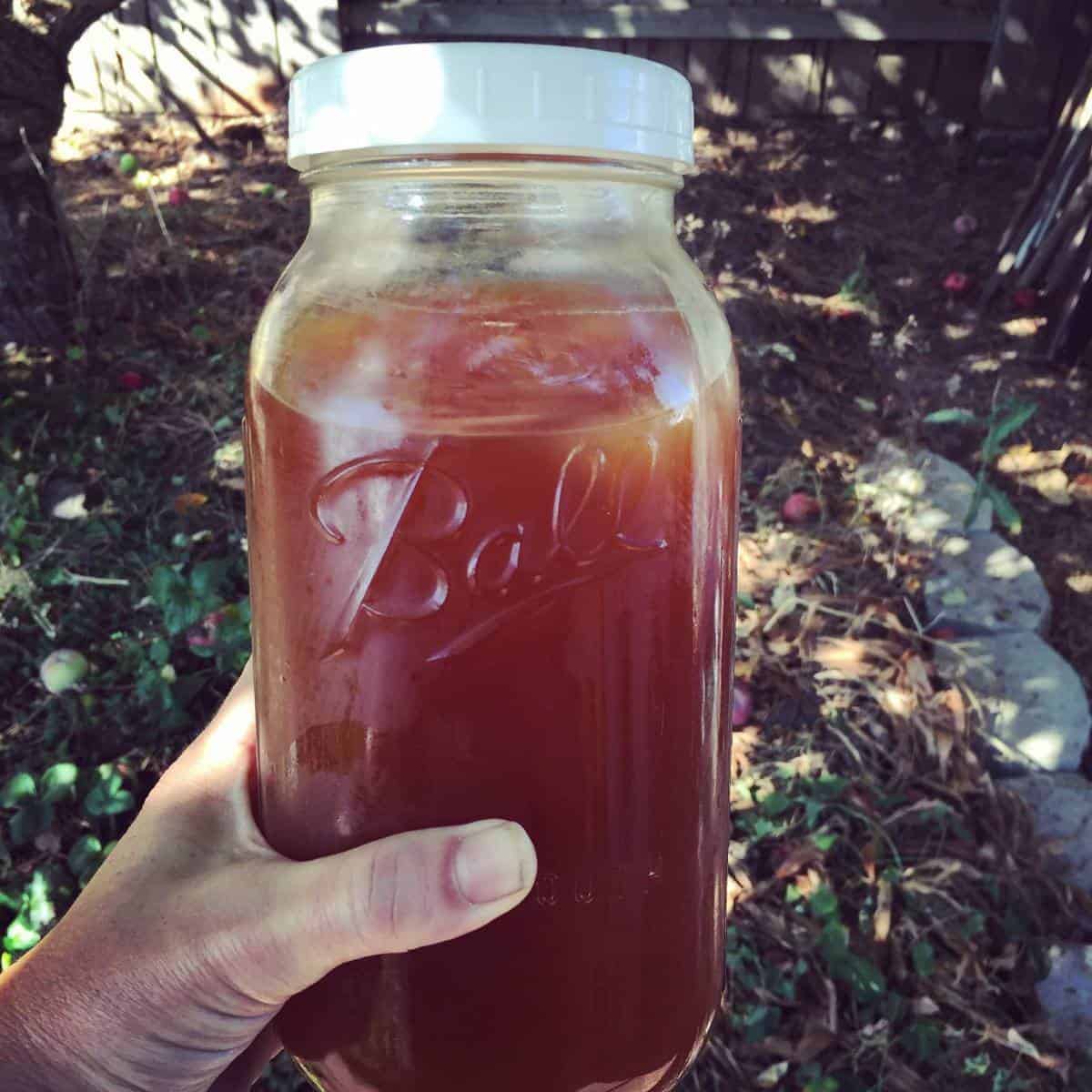 This is by far the best tasting apple cider that I have ever had! I am so proud of us for being creative and using our resources to decrease food waste and create something delicious.

Now, it’s time to start thinking about making some hard cider, wild hard cider, apple cider jelly, no sugar apple jelly, or mulled cider with this fresh juice! I will keep you updated on that process.

Check out my post on preserving apples for more ideas on how to use apples!

Have you ever pressed your own apple cider? What method did you use?