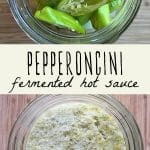 This fermented pepperoncini hot sauce is an easy and delicious summer fermented food recipe. It’s perfect for preserving the summer harvest, packed with tons of flavor, and not quite as spicy as traditional hot sauce. 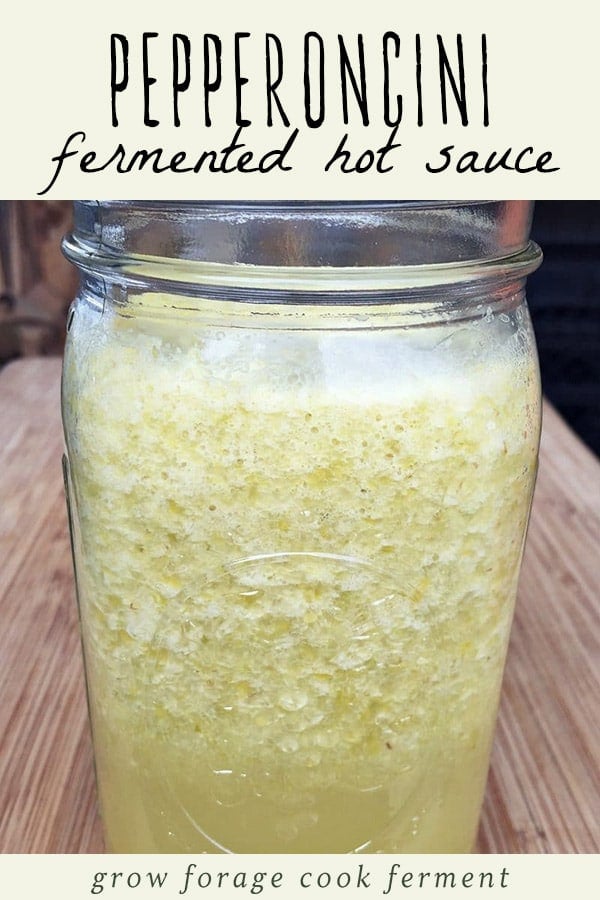 For some reason this year, most of our pepper plants didn’t do very well. We only got one or two bell peppers total, and a few hot peppers here and there.

Then we have this one pepperoncini plant which has produced so many peppers that I don’t even know what to do with all of them!

I turned a bunch of them into pepperoncini refrigerator pickles to put on sandwiches and pizza.

The plant then had a second flush of peppers, so I decided to ferment them this time around. Then I got the great idea of turning them into fermented pepperoncini hot sauce!

Pepperoncini’s are such great peppers because they are a little bit spicy, but not overly so. They also have an excellent flavor that is more than just “hot.”

I absolutely love fermented hot sauce and generally make it a couple of times a year to make sure that we always have some around.

I usually make it with hot red peppers, or sometimes jalapeno peppers, but when we had an excess of pepperoncini peppers I knew I had to give it a try with them. 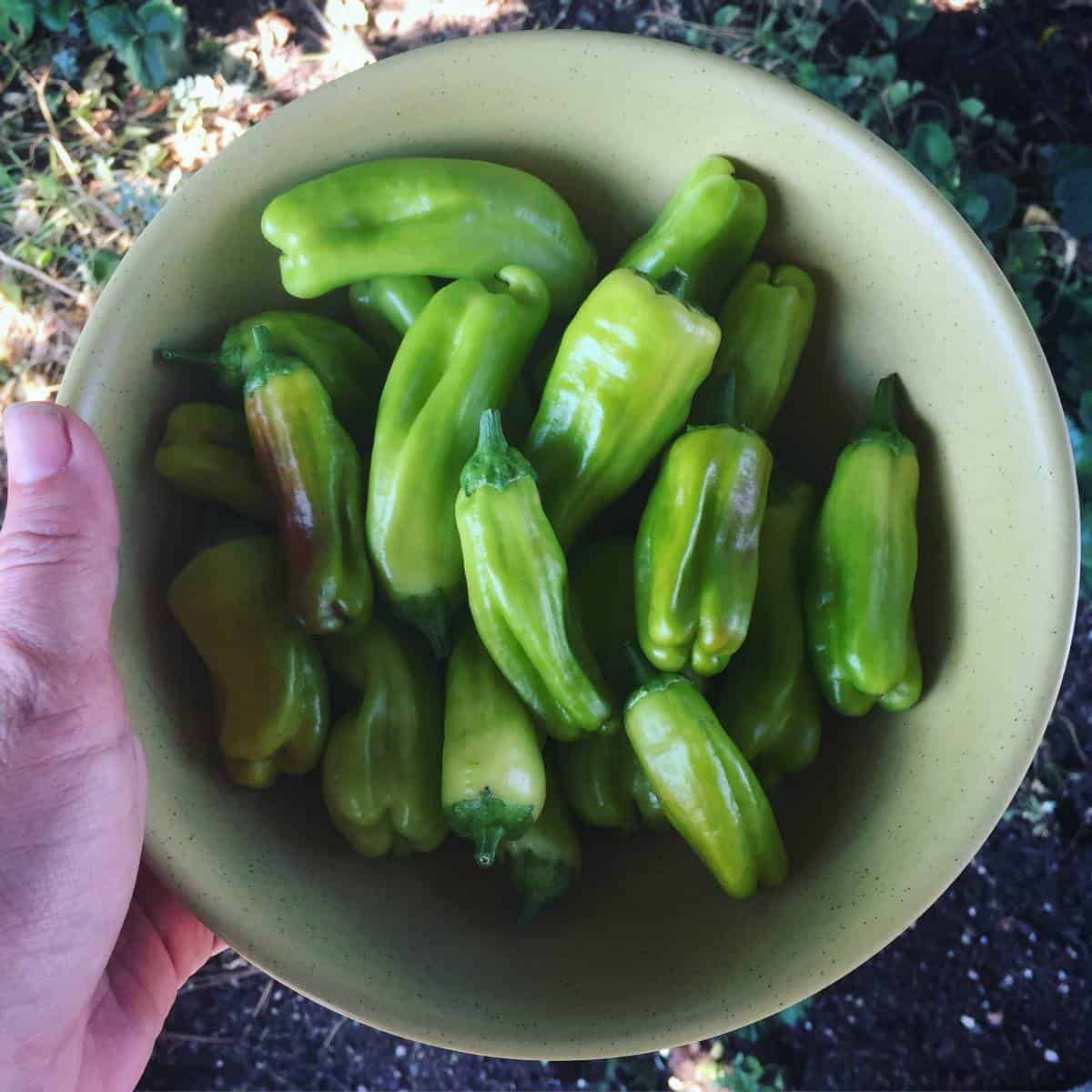 It’s actually a pretty simple process, and I basically followed my general recipe for how to make fermented hot sauce.

Cut the pepperoncini peppers in half (you can leave the stems on), and layer them in a quart sized jar with the chopped onion and garlic cloves.

You can remove some of the pepper seeds if you’d like it to be a little less hot. 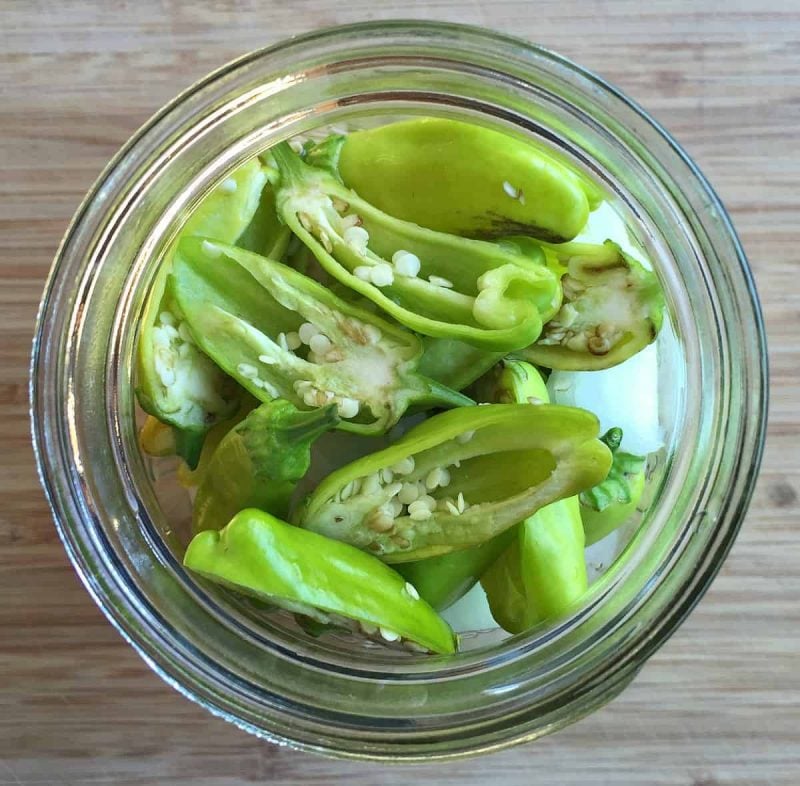 Add the salt to the jar, and fill with filtered water to cover the veggies. Cover and shake the jar a few times to help dissolve the salt. 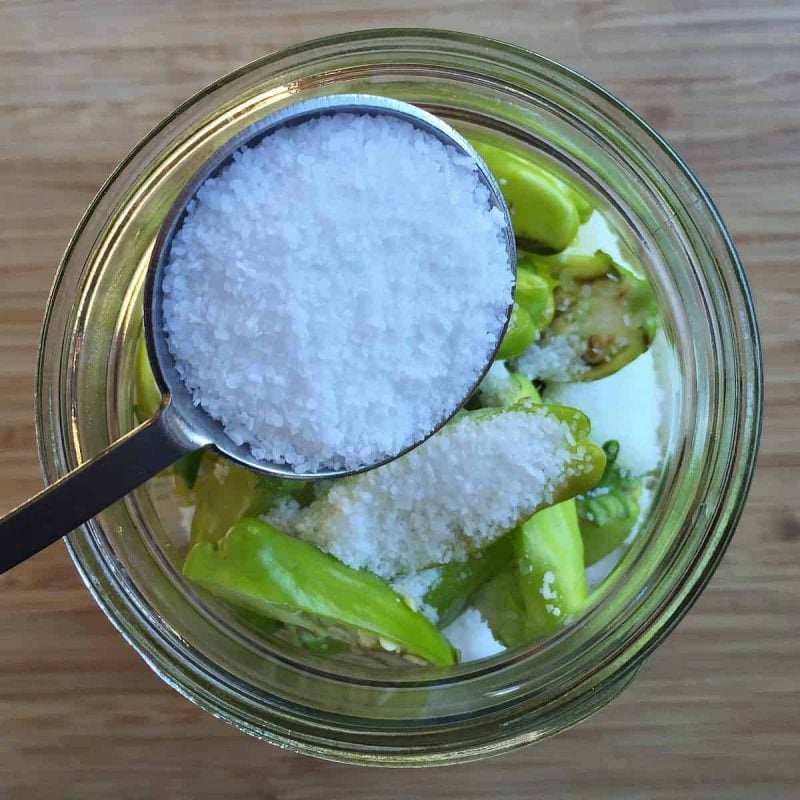 Weigh the veggies down with a fermentation weight to keep them under the brine (you can also use a zip top baggie filled with water as a weight). 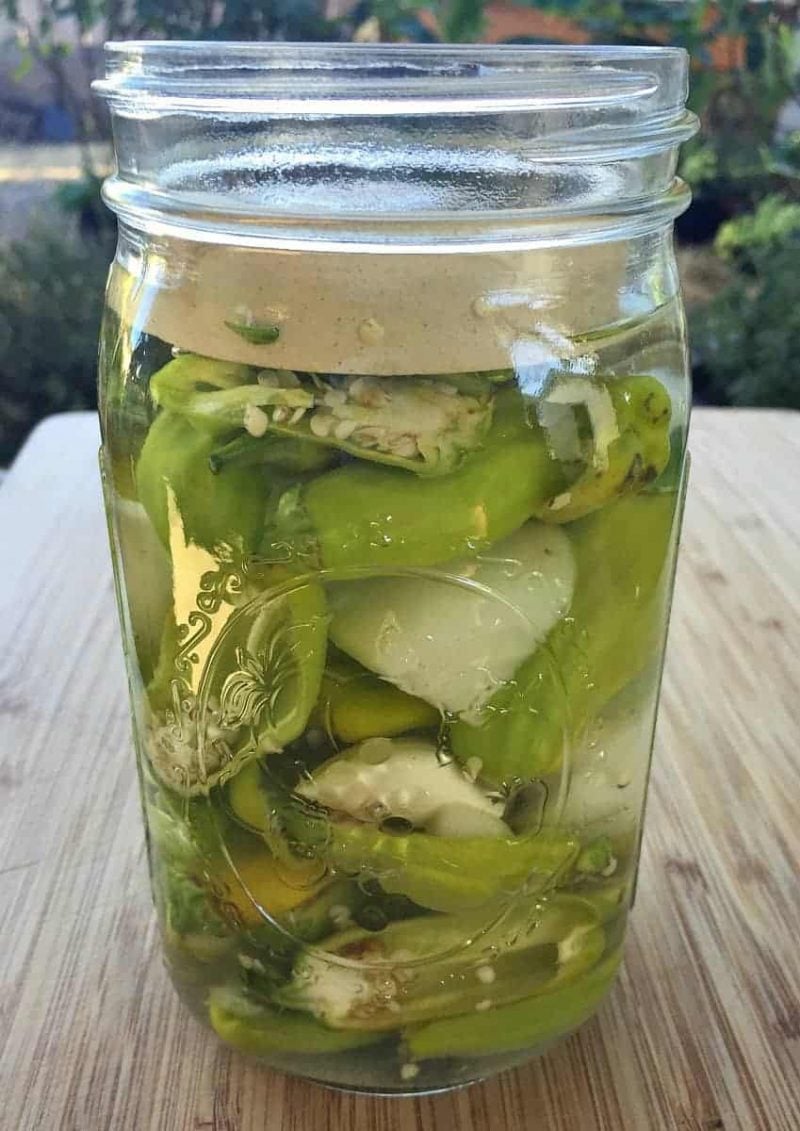 Cover the jar with a cloth secured with a rubber band, and let it ferment in a dark corner for 1-2 weeks.

When the veggies are done fermenting, put the contents of the jar and the apple cider vinegar into a blender. You may not want to use all of the brine, depending on how thick you want the hot sauce to be. 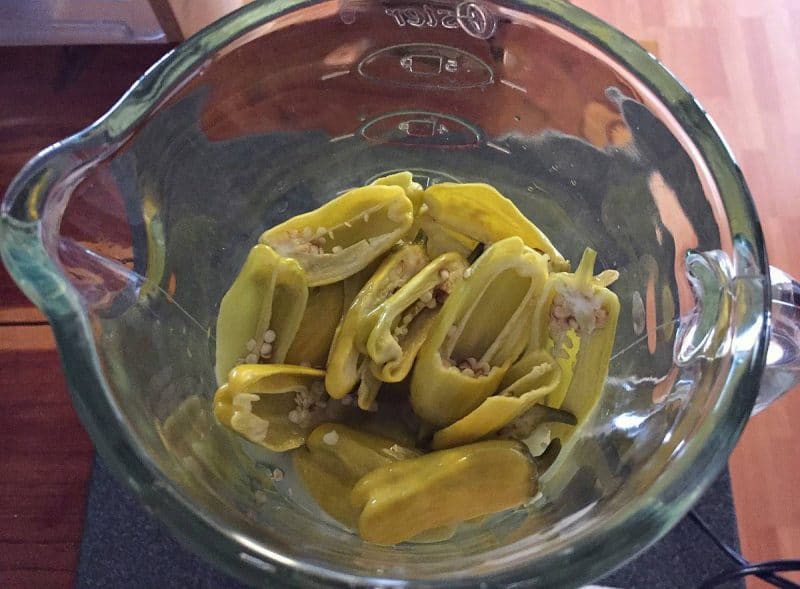 Blend into hot sauce, and store in the refrigerator.

If you use all of the brine it will be fairly liquidy. I am ok with that, because then it can readily go into a squeeze bottle that is easy to use.

If you’d like a thicker hot sauce, or even something more like fermented chili paste, use less of the brine when you blend. 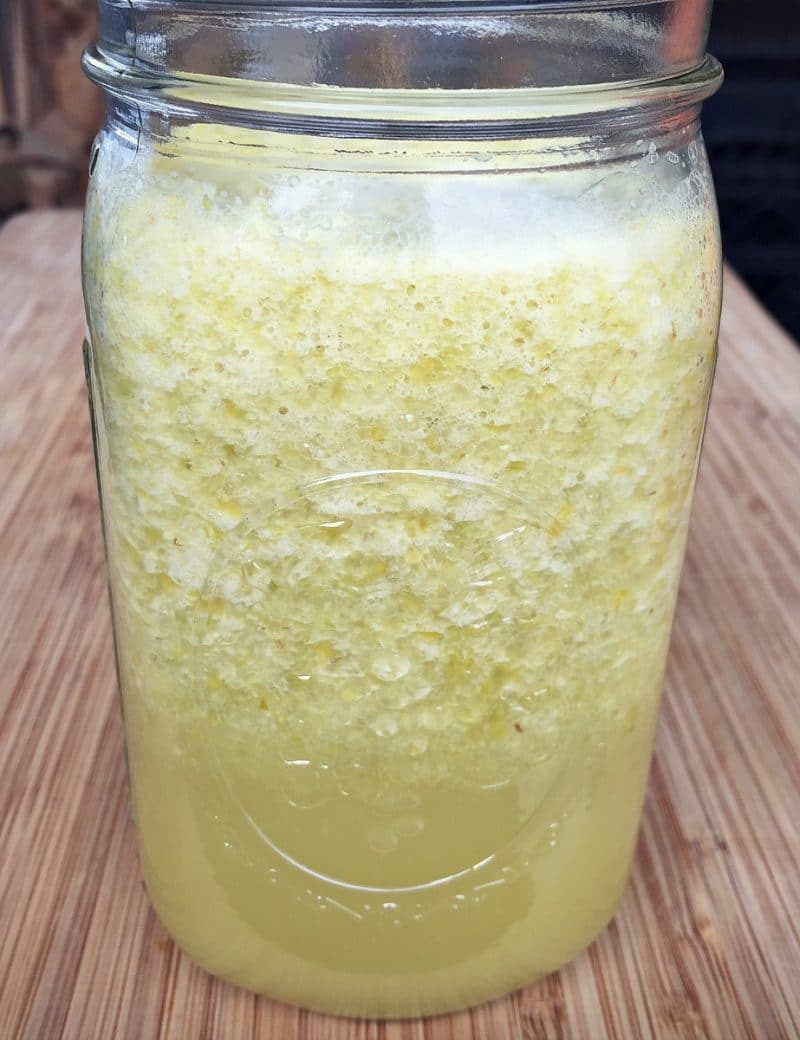 These peppers smelled so good after fermenting! They would be really good just on their own as well, even if you didn’t want to turn them into hot sauce.

They lost a bit of their green color during the fermentation process, which is normal. 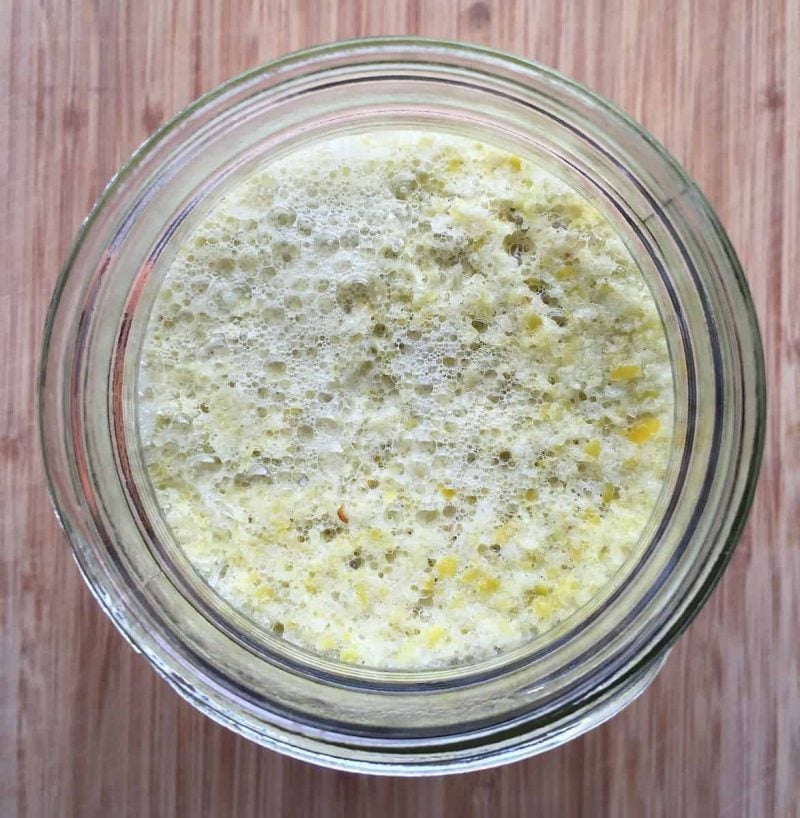 I am so happy with how this fermented pepperoncini hot sauce turned out, the taste is incredible! It has just enough heat to be classified as a hot sauce, but is not so hot so many people can still enjoy it.

It’s definitely going to become a new staple in this household!

Have you ever made fermented hot sauce? What did you think of it?

Love a good fermented sauce recipe as much as I do? Here are a few others for you to try! 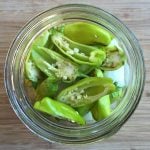