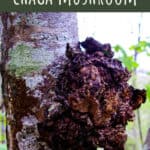 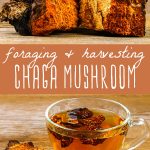 Chaga fungus is already highly celebrated in health and wellness circles for, well, just about everything. Among the claims made for chaga’s usefulness are its high concentration of antioxidants, as well as its anti-inflammatory properties. I will examine the benefits of chaga later in this post, but first let’s talk about foraging chaga, how to harvest chaga sustainably, and how to use this amazing fungus! 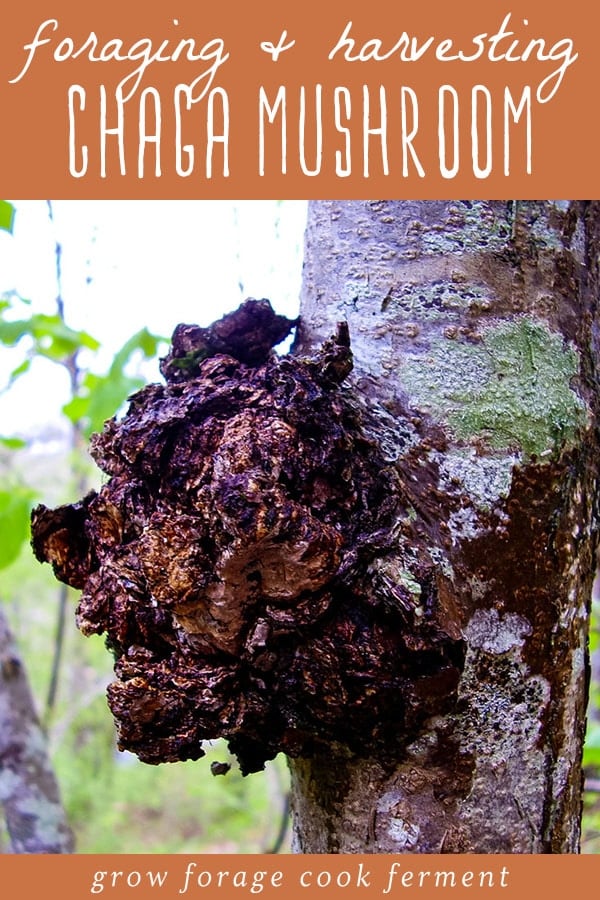 It’s beginning to look a lot like cold weather season!

As this year’s winter chill creeps in and you consider the extensive inventory of medicinal flora to help boost your immune system and address the aches and pains of frosty times ahead, don’t forget fungi!

In particular, there is one unassuming medicinal wonder dwelling in the colder forests of the northern hemisphere that you won’t want to overlook.

The chaga fungus, a purported superfood and remedy for numerous ailments, is well worth a brisk hike through the woods with your gathering bag and hatchet.

If you find the mighty conk, your work will be rewarded with a cup of rich, earthy chaga tea that isn’t too hard to brew!

Related: What to Forage in Winter: 30+ Edible and Medicinal Plants and Fungi

What is Chaga Fungus?

It is also referred to as the King of Medicinal Mushrooms (though it is a mycelium mass and not technically a mushroom), clinker fungus, and tinder conk (for its high flammability and long, slow smolder).

The fungus forms a parasitic relationship with the birch tree that can last decades, wherein the chaga grows slowly, surviving off the tree’s nutrients.

You may also hear the birch-chaga relationship referred to as symbiotic or mutualistic, because some claim the fungus actually aids the tree by enhancing its immune system and healing it from external damage.

Still, the fungus will eventually kill the birch tree, though they can live together for many years.

This disagreement about the chaga-birch relationship is only one example of the variability in definitive information currently available about chaga, at least to a general audience.

Though it has been featured in Eastern medicine for centuries and has been studied for the last 50 years or more in regions such as China, Siberia, and Northern Europe, research performed with actual human subjects is scarce.

The bank of knowledge may continue to grow, however, as chaga gains widespread attention for its healing potential. 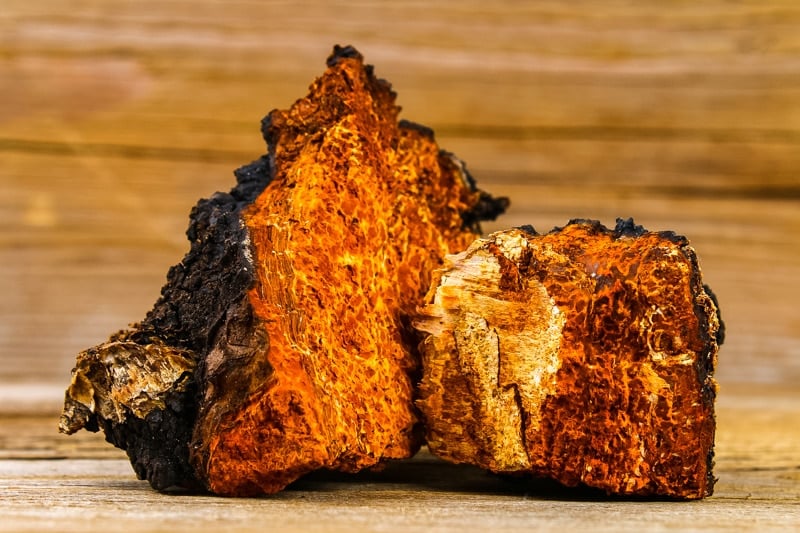 If you read up on chaga, you will find a variety of claims about its health benefits. Some have been tested in clinical studies (though often not on humans), while others have not.

Many that are tested have broad limitations in the study’s scope. Therefore we can’t draw firm conclusions about how chaga might treat or cure certain health problems.

This doesn’t mean you shouldn’t try chaga and learn how it works for you, but use common sense and avoid seeing chaga as a “cure-all” for anything that ails you.

Related: 6 Medicinal Mushrooms for Your Health

These are some of the enticing benefits people associate with chaga: 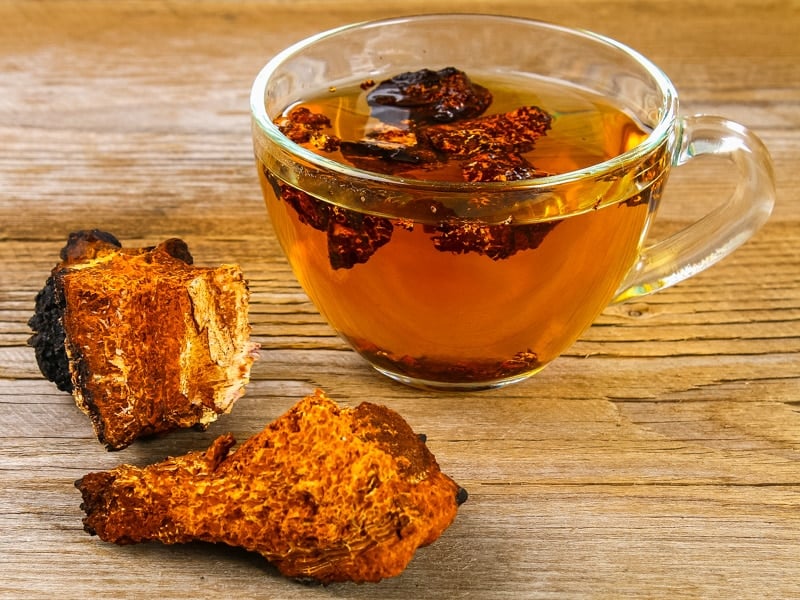 Look for this marvelous fungus in late fall and all throughout the winter, until spring’s warmth causes the birch sap to flow.

Though chaga is present year-round, some people insist that the colder months are the best time to forage chaga because the birch is dormant and there is more energy stored in the chaga.

When the sap begins to flow, the chaga may retain more water, reducing the nutrient concentration.

Another good reason to harvest chaga in the winter is the lack of foliage in deciduous forests, making it easier to spot chaga up in a tree.

Since the chaga fungus grows primarily on birch trees, focus your attention on finding mature birches, which will likely grow in well-drained soil near water, with access to sunlight.

Be sure to only take chaga from living birch trees, because the fungus dies when the tree dies. You definitely don’t want to consume dead or rotting chaga. Yuck!

Because of its blackened exterior, it is easy to mistake a chunk of chaga for a burnt or rotting piece of the tree.

People also mistake burls for masses of chaga, because they both protrude considerably from the tree’s bark, and some burls can have a dark exterior like chaga.

Once you know what to look for, however, you shouldn’t have much trouble identifying chaga and telling it apart from the look-alikes.

The bottom-line in foraging chaga is to be informed by doing your research before you head out in search of the fungus.

This will reduce your likelihood of accidentally harvesting something that isn’t chaga, or harvesting the chaga inappropriately. 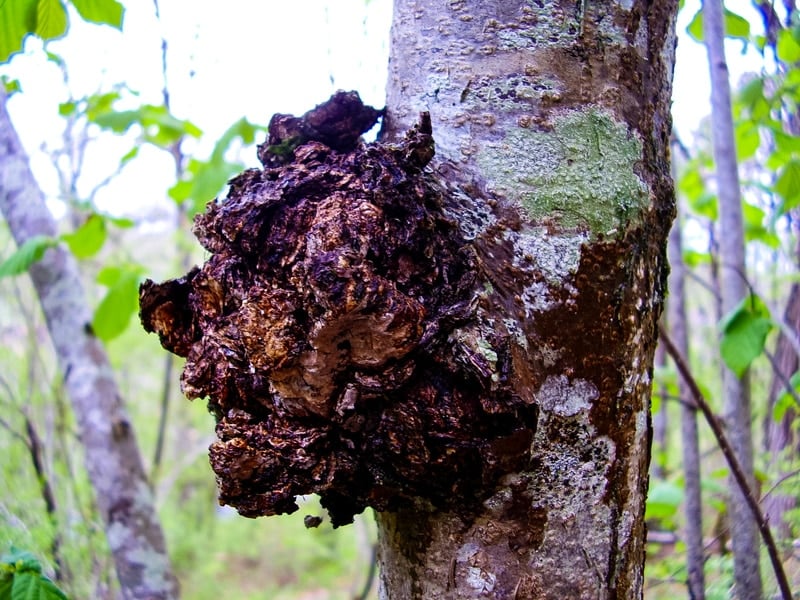 Speaking of inappropriate removal, chaga is particularly vulnerable to overharvesting. Because it grows slowly and has health benefits, chaga is a prime candidate for becoming quickly depleted.

If you live in an area with access to chaga, practice ethical foraging principles by taking only what you need and leaving enough chaga behind so that it can regrow and continue thriving.

The slow-growing chaga takes years to reach maturity and develop spores for reproduction. To give chaga enough time to reproduce before you disturb it, only harvest from fungal masses that are larger than a grapefruit.

Opinions differ on how much of the fungus to take at one time. A good rule of thumb is to leave at least ⅓-½ of the chaga intact and connected to the tree.

In addition, only take that much if you have solid plans for properly storing and/or promptly using all of the chaga. Never take the entire chaga mass, and avoid cutting into the tree.

The chaga will be quite hard, and you will need a sharp, sturdy tool to break into the fungus. Some people use a hatchet, while others use a small saw, hammer and chisel, or even a very strong knife.

Regardless, be ready to sweat a bit!

Once you penetrate the dark exterior, the chaga’s interior should be a lighter brown-orange color.

Chaga can rot and mold easily, so when you get home be sure to dry it out by leaving it on a baking sheet near a woodstove or other heat source. Don’t bake it in the oven.

Where to Buy Chaga

So, what if chaga doesn’t grow near you?

The most sustainable decision would simply be to go without. As someone who lives in a place that is too warm for chaga, I can understand the desire to try its earthy goodness.

If you choose to buy chaga online or in a store, be very critical. As with other environmentally contentious products, marketers will make claims about their chaga that sound green but don’t tell the whole story.

Additionally, it is not clear that chaga grown artificially (i.e. not from a living birch tree out in the woods) contains the same benefits as wild chaga.

I did a bit of research and found two chaga sources that appear to be reputable: Sayan Siberian Chaga and Alaska Chaga.

You can also purchase prepared chaga supplements from Host Defense (one of my favorite brands of medicinal mushroom products): Chaga Capsules or Liquid Extract.

The most common way to consume chaga is in a tea.

Of course, the “best” way to make chaga tea is a hotly debated topic among chaga enthusiasts.

While some insist that boiling is the best method to extract chaga’s beneficial components, others are adamant that boiling actually destroys them. 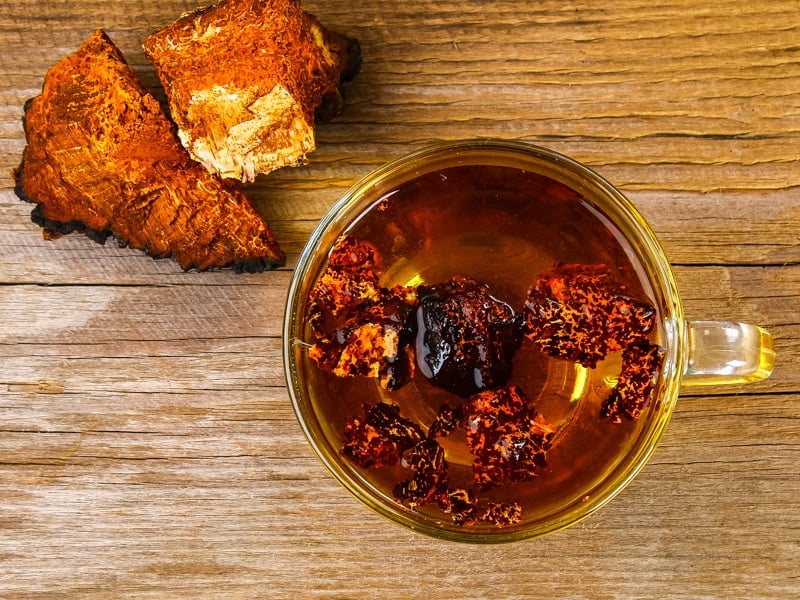 Some recommend using larger chunks of chaga when making tea, while others recommend grinding it into a fine powder to increase surface area and enhance the chaga’s potency.

Keep these differences in mind as you explore the chaga recipes below. Experiment to find your own preferred method for preparing and enjoying this fabulous fungus!

Here are some recipes and methods for making chaga tea:

There is a super yummy recipe here on the blog for chaga chai with carob and coconut. And these recipes for chaga turmeric milk and chocolate chaga tea latte also sound amazing!

Explore our other mushroom foraging guides so you are prepared for your next expedition into the woods!