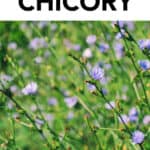 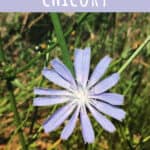 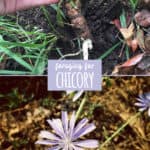 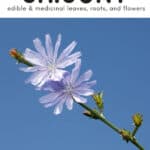 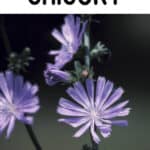 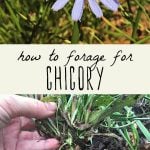 Chicory might be one of those plants that you’ve probably seen a thousand times but never knew what it was. It is extremely common along roadsides in many areas of the country, and I’m sure that you’ve passed it by a time or two. What you may not have known is that chicory is an edible and medicinal plant, and the leaves, flowers, and roots can all be used. Since it’s such a common plant, foraging for chicory is usually pretty easy. Once you know what it looks like you will probably start noticing it everywhere! 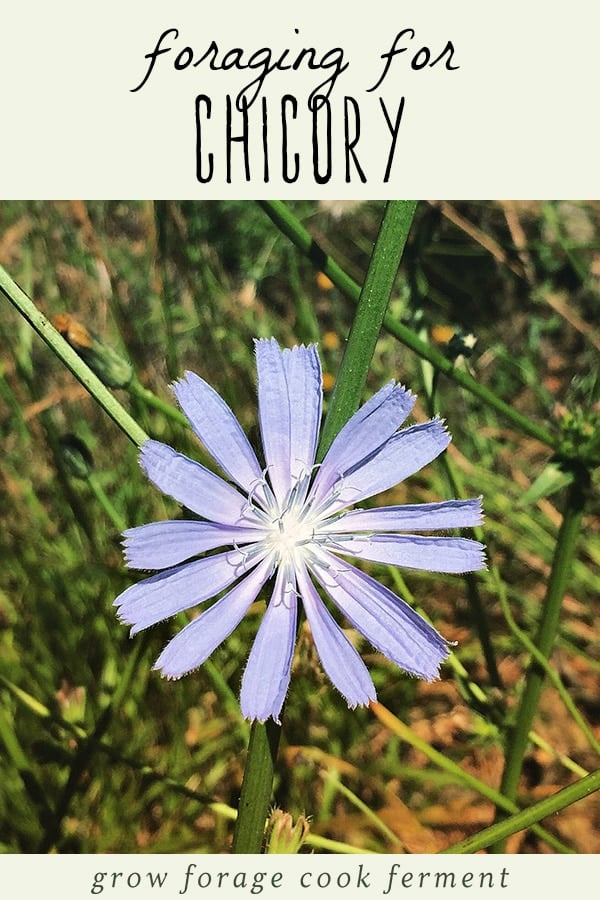 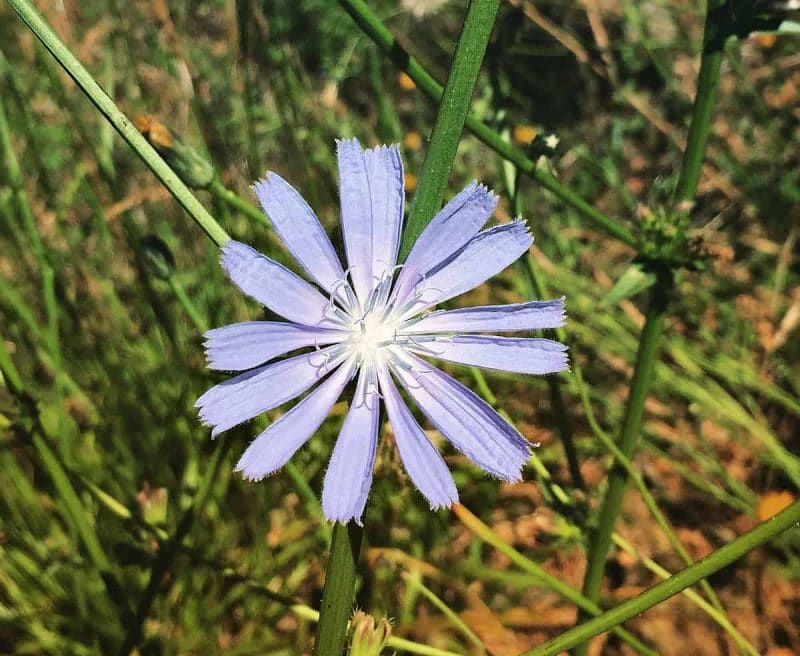 One thing to watch out for when foraging for chicory is its location. It’s not wise to gather any plant that is growing along roadsides, as it is likely to be contaminated with exhaust and oil.

You also want to be aware of areas that could be sprayed with herbicides. Since chicory often grows in disturbed areas and is sometimes considered a weed, or even an “invasive” species, there is a higher likelihood of this. Do a little research, and make sure that you are collecting in an area free of toxins.

Chicory is a perennial plant in the dandelion family, and is closely related to the cultivated varieties of endive and radicchio. The young leaves of chicory can be eaten raw and are a great addition to salads.

The leaves are bitter, so a little goes a long way, but it’s those bitter compounds that make them very good for you. They can also be cooked, which will release some of the bitterness. 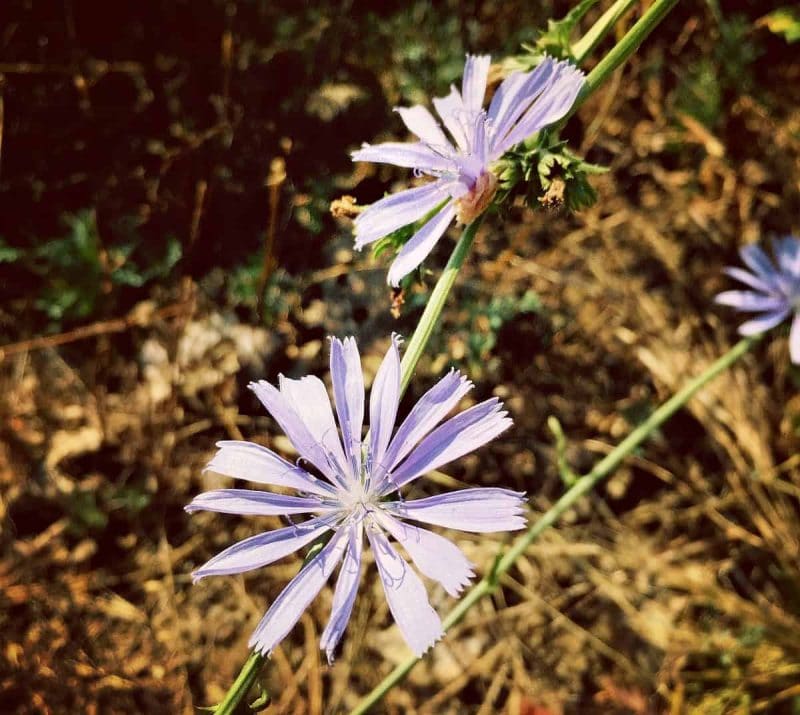 Chicory typically blooms between July and October. The flowers are bluish purple, and grow along a long stalk. They will typically open in the morning, and on warmer days I’ve seen all the flowers closed up by early afternoon. 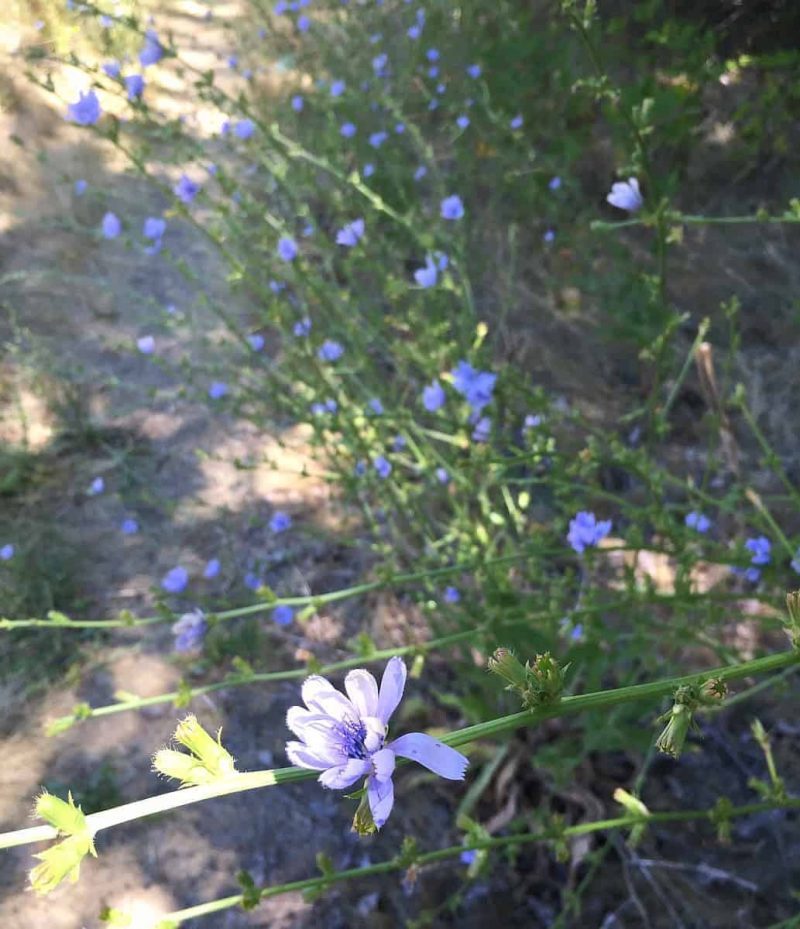 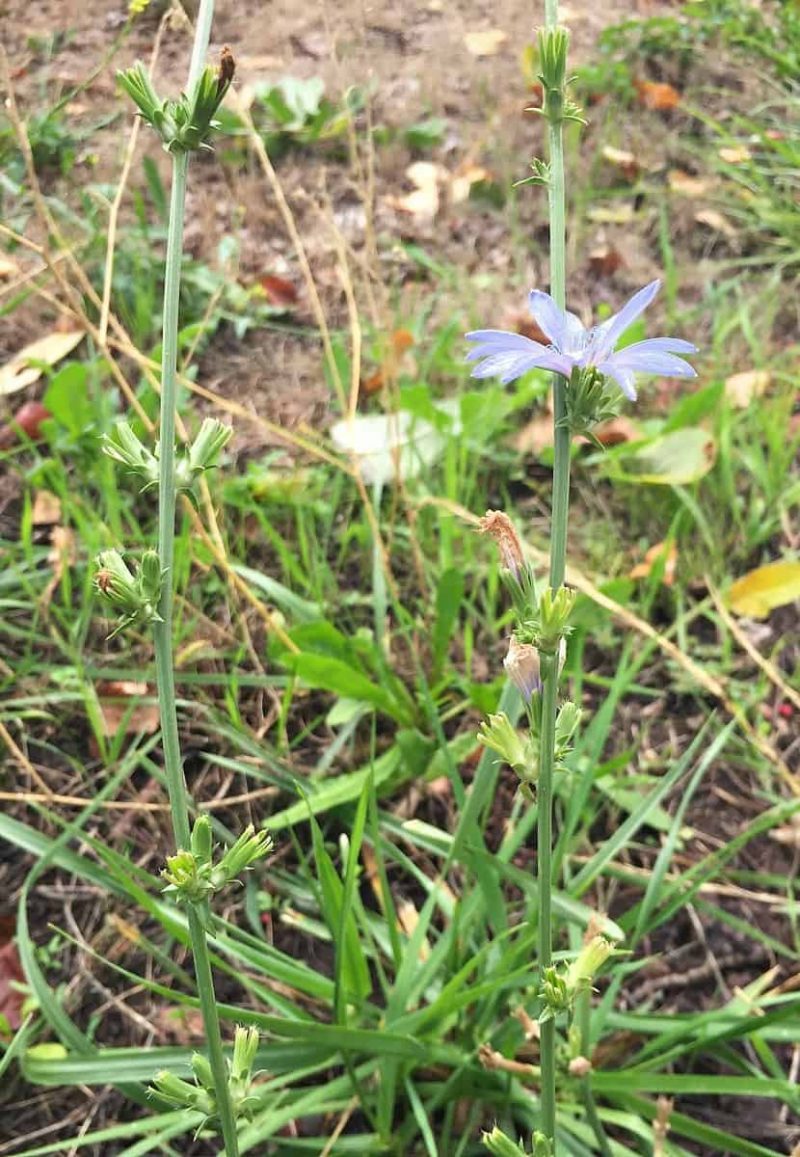 Wild chicory is perhaps best known for its root. Foraging for chicory root is usually done in the fall, as with other edible and medicinal roots like dandelion, valerian, and burdock.

It can be a bit tricky to harvest chicory root, as they often grow in hard packed ground. If I’m collecting roots, I try to find areas with loose soils, but this is not always possible. Digging a bit around the root increases your chances of getting more of it. 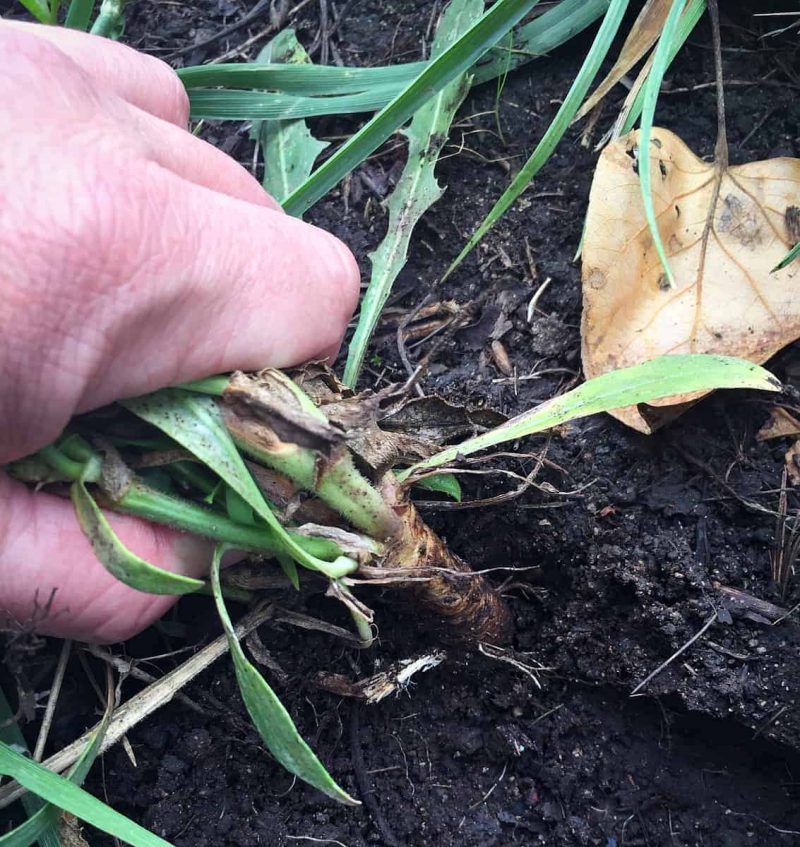 I am often unsuccessful at getting the entire root, but the way I look at it is at least there’s a pretty good chance that this plant will grow back next year from the remaining root! 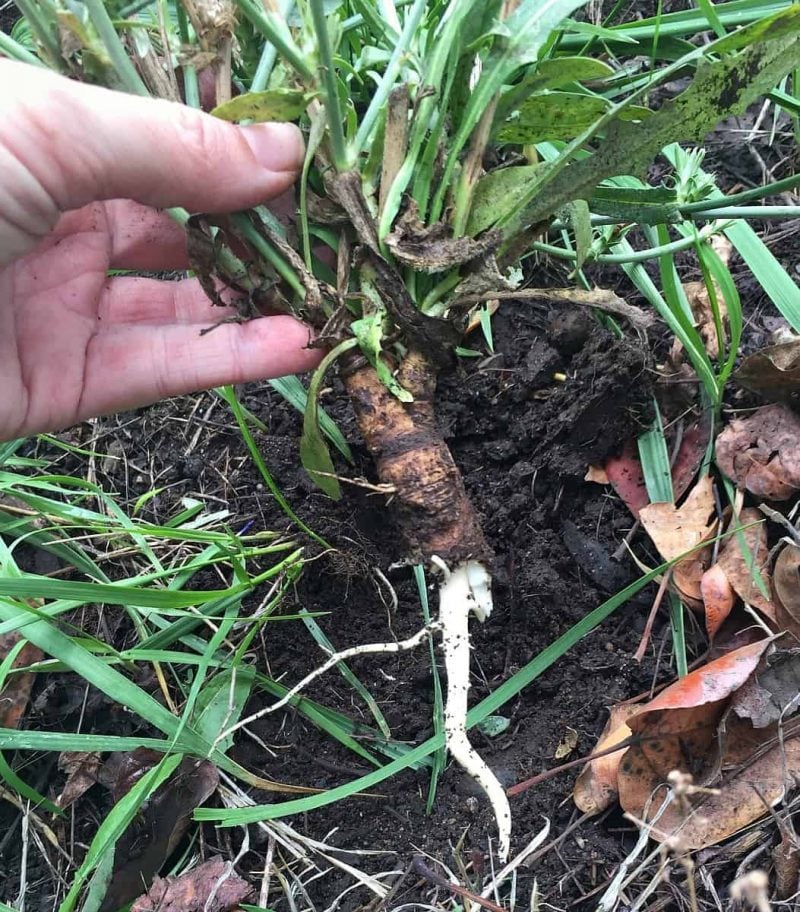 Chicory root is edible and full of inulin, an excellent source of fiber and prebiotics. It is commonly roasted and used as a coffee like substitute, minus the caffeine.

These recipes for Chicory Mocha and Dandelion and Chicory Chai are tasty ways to reap it benefits. 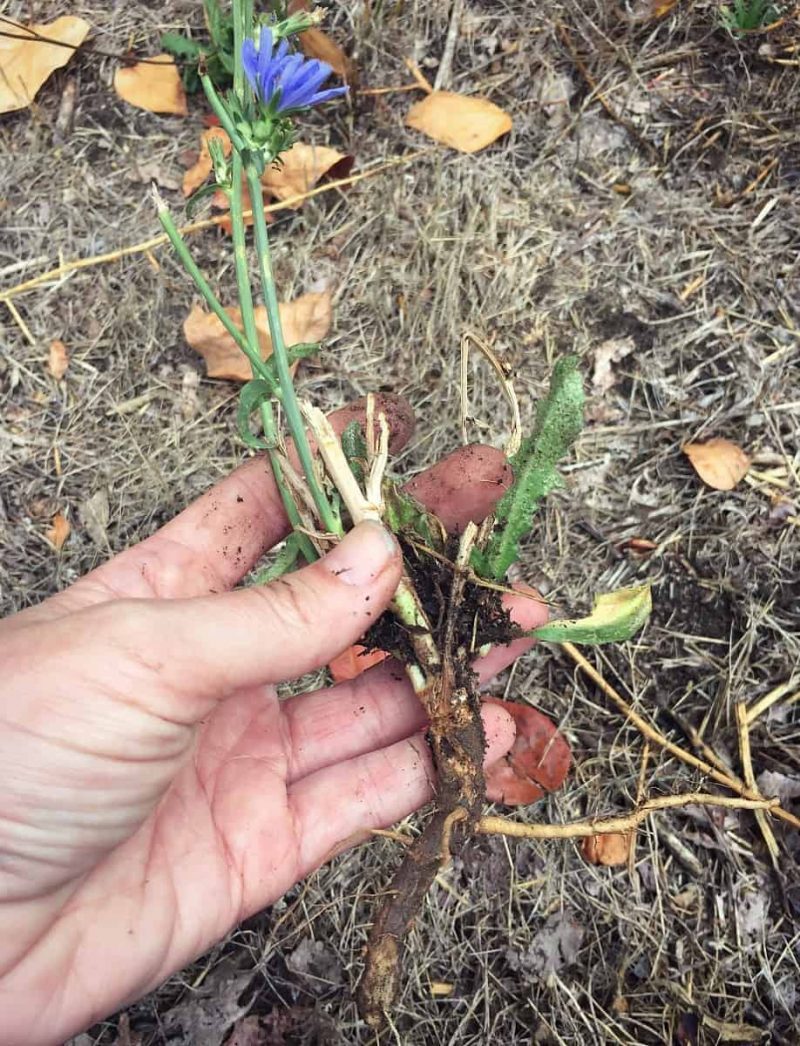 Chicory root is also known for being toxic to parasites, which makes it great for livestock forage. It is also used as a flavoring in beer, which got me thinking a little. Maybe I’ll try making a fermented chicory brew one of these days!

If you can’t find chicory, or if it’s the wrong time of year for foraging, you can always buy roasted chicory root from Mountain Rose Herbs (my favorite source for high quality, organic herbs).

I hope this inspires you to go foraging for chicory!

Check out these other lovely flowers that are good for foraging!

Previous Post: « How to Save Tomato Seeds by Fermenting
Next Post: Applejack: Is it Legal and Safe? »