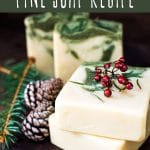 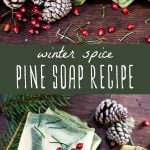 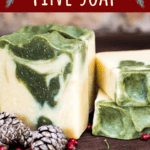 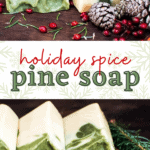 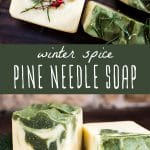 Learn how to make an ultra-conditioning bar of all-natural Winter Spice Pine Soap to help moisturize your dry winter skin! With an amazing sweet-spicy evergreen scent it will be your new favorite seasonal bar of soap. 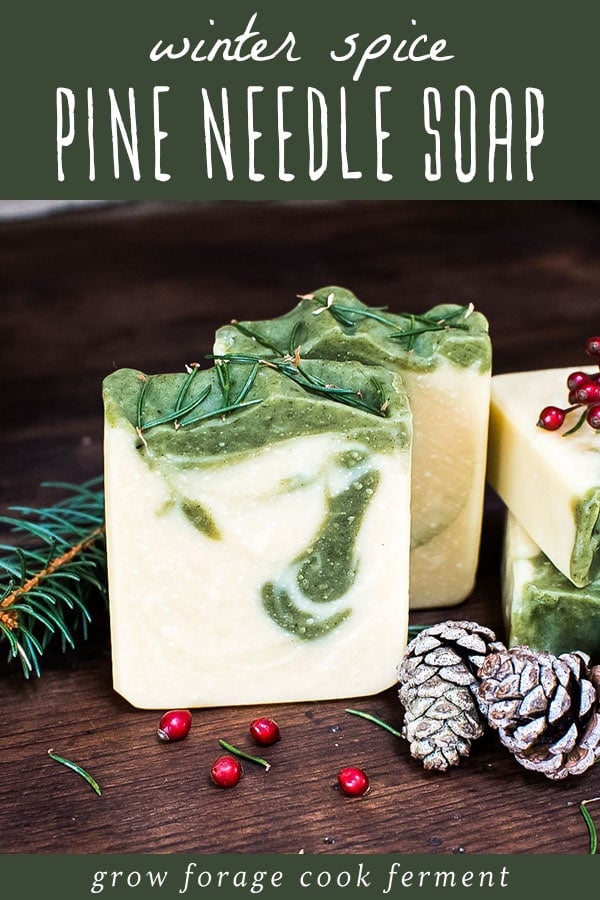 If you are new to making soap, I suggest reading my post on how to make soap for beginners first.

They are perfect for beginners and have step by step instructions for making your own natural soaps, with recipes too. It’s how I learned how to make soap! 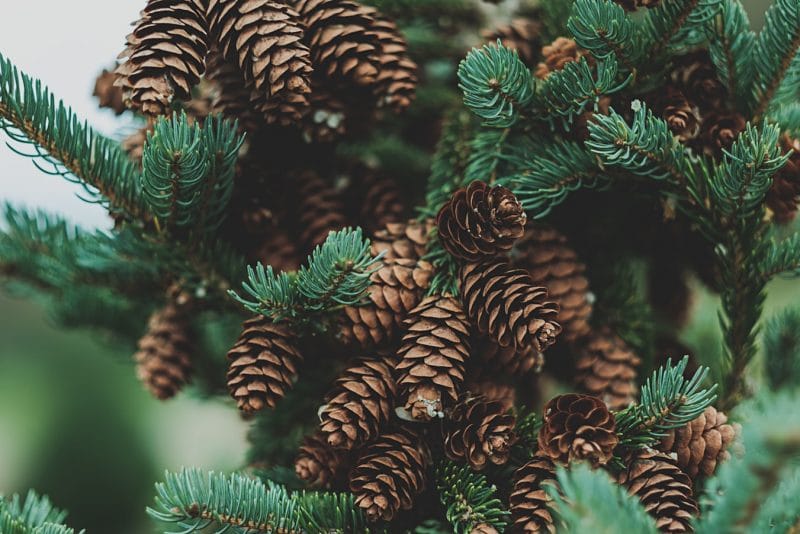 This homemade pine soap recipe is for a vegan, all-natural, cold processed soap. It makes about 10 bars depending on your soap mold.

Because this is a palm-free vegan soap recipe, it is on the softer side so I recommend an 8-week cure time. But the final bar will be just as cleansing without sacrificing any of the moisturizing properties.

Olive oil and avocado oil are ultra-conditioning while the coconut oil makes a bar that will get you clean as can be. The castor oil is added to help give the lather a bit of a boost.

One thing I love about this amazing essential oil blend is that it doesn’t fade like other essential oils can do in cold processed soap. In fact, I came across a bar with this blend two years after I made it and it still smelled just as delightful as it did on day one!

For the green colorant, I used chlorella powder. I wish I could use a herbal colorant but in my experience, they fade to brown fairly quickly.

Chlorella powder or liquid chlorophyll are my favorite natural green colorants for soap I’ve used so far. If you’d like an all-green bar of pine soap, simply add 1 heaping tablespoon after trace and use the immersion blender to mix it in well. 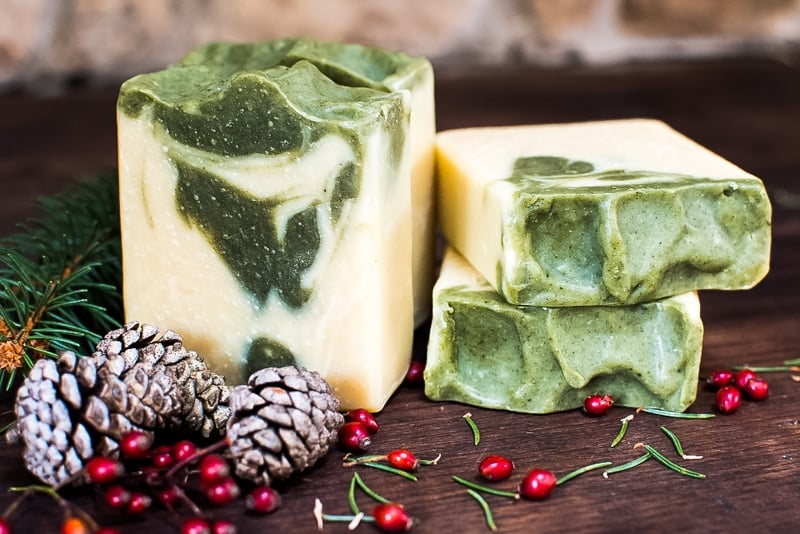 How to Make Pine Soap

Because the bulk of the oils used in this pine soap recipe are already liquid, it doesn’t have that passive waiting time while the oils cool down like many other soap recipes.

And because the water portion (the pine needle tea) is frozen into ice cubes first, the lye mixture doesn’t heat up above 100 degrees F. This means all of the ingredients are ready to go, right in that comfortable 90-degree range and you can move on with your day sooner.

Begin making Winter Spice Pine Soap by creating a couple of herbal infusions. Which means it’s time to do some winter foraging!

I tend to find excuses not to go out into the cold, but I never regret it once I’m outdoors so this soap is a good reason to suit up for an excursion into the woods.

While you’re out foraging for pine needles grab a little extra for making your next batch of Pine Needle Cough Syrup or some of these other amazing Conifer Needle Recipes.

While you can use any conifer needle to create the herbal infusions in soap, I chose White Pine.

The primary species on our land are White Pine and Norway Spruce (with a dozen or so Red Pine in the mix). I find the White Pine needles to be easier to harvest and make the a fragrant herbal infusion.

You can do a cool infusion or a warm infusion depending on how busy you are (and how quickly you need the soap to be ready.)

I packed a quart jar full of pine needles and covered it with the oil. Just be sure to infuse a few ounces more than the approximate 13 ounces required for this recipe because you’ll lose some along the way as it coats the needles and the sides of the jar.

Learn more from our articles about making an herbal infused oil or conifer infused oil. 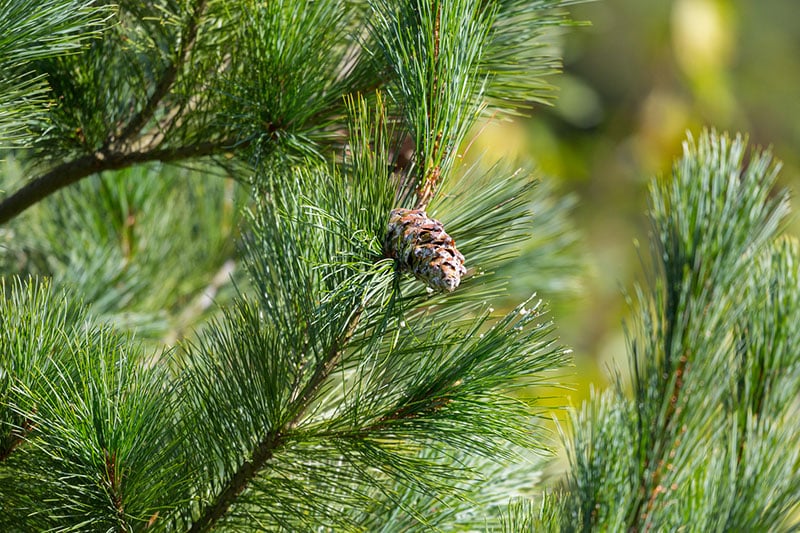 Preparing a pine needle tea is just as straightforward as it sounds. You can use any edible conifer needle you have available to you (avoid Yew as it is toxic). Once again, I used white pine.

In this case, I didn’t bother measuring the liquid. I simply packed the quart jar and covered it with boiling water. Allow the needles to steep in the water until it has cooled to room temperature and then strain the needles out.

I pretty much freeze all of the water portion into ice cubes when soap making. Whether it’s plain water, herbal tea, or milk, there are little to no fumes after the lye is mixed in. There is also no rush to make soap whenever the tea is ready if something happens to come up, and there is no wait time while the liquid/lye mixture cools back down. 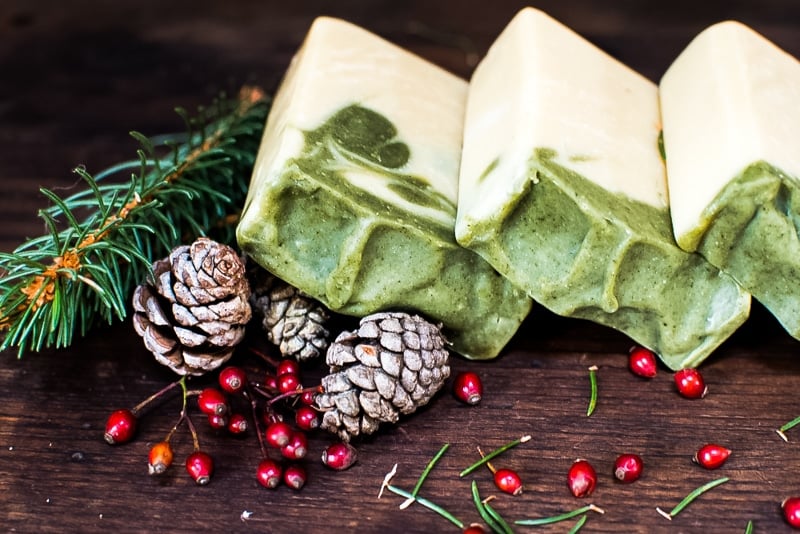 Once your infusions have been prepared, it’s time to make pine soap!

You will want to get the coconut oil melting on a double boiler. Since there are so few solid oils in this recipe I just added the coconut oil to a mason jar and set that in the water-filled saucepan to boil.

Meanwhile, measure out the remaining ingredients. I begin with the lye/pine needle tea mixture in case it needs to cool down before mixing it into the oils.

Add the lye to the ice cubes in a glass bowl and slowly mix them with a spatula. Makes sure you’re wearing safety glasses and rubber gloves just in case it splashes. Once the lye has completely dissolved, set the bowl aside.

Measure out the essential oils and colorants and set them aside.

In a separate bowl measure out the liquid oils. It’s a good idea to measure each one individually and then add them together. When you’re mixing liquid oils , there’s no taking them back out if you accidentally pour in too much!

Once the coconut oil has melted, stir it into the liquid oils. Then pour the liquid oils into the lye mixture and stir them until combined. Then it’s time to break out the immersion blender.

Using the stick blender, mix the pine soap until it reaches a light trace. Because there are few solid oils, this may take a little longer than normal. I made sure to verify trace using a thermometer. To do this, all you have to do is take a base temperature of the mixture after stirring it all together.

After a few minutes using the stick blender, check the temperature again. Once you’ve seen it rise 3 degrees or so you know that the chemical reaction has happened even if it’s difficult to see trace.

Add in the essential oil blend and give it another good go-around with the immersion blender.

If you’ll be swirling the soap, remove about 10 ounces of the batter to another bowl. Use the immersion blender to mix in the chlorella powder.

Take a chopstick or even the thermometer probe and swirl the soap a little. Insert it at about a 45-degree angle and simply draw circles moving towards the other side of the mold as you swirl.

Spread a thin layer of the white batter over the top then follow it with the remainder of the green batter, spreading it carefully so as not to mix the 2 layers. 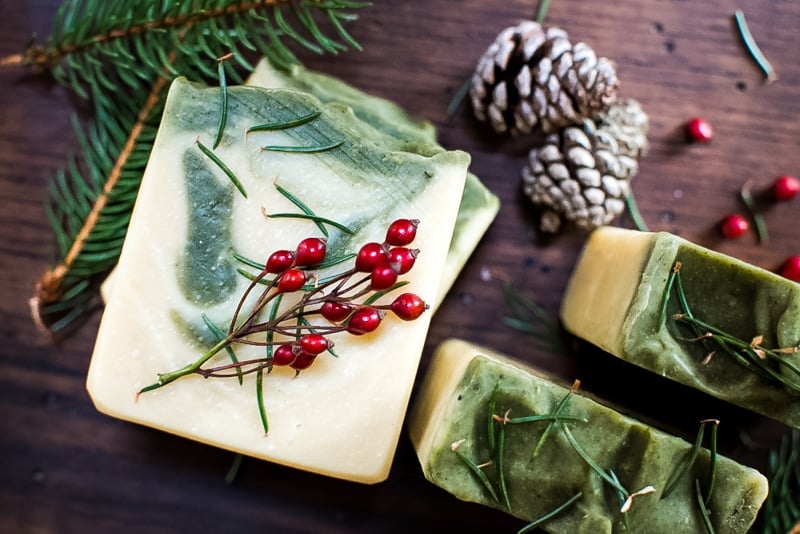 Curing and Decorating the Soap

With my tallow-based recipes, the soap is usually ready to remove from the mold after a day or two. This soap took a little longer to harden because of the liquid oils. For the same reason, it will also take longer to cure.

Technically, you can use it after curing for 4 weeks, but if you can resist the temptation, it will last a lot longer if you let it cure for at least 8 weeks.

This pine soap would look beautiful with a sprinkling of spruce needles along the top, maybe a few juniper berries to increase the wintry piney scent.

Dried hawthorn berries or even rainbow peppercorns would also be a lovely addition!

Be sure to share your love of soap making with your friends and family because this Winter Spice Pine Soap makes the perfect homemade gift! 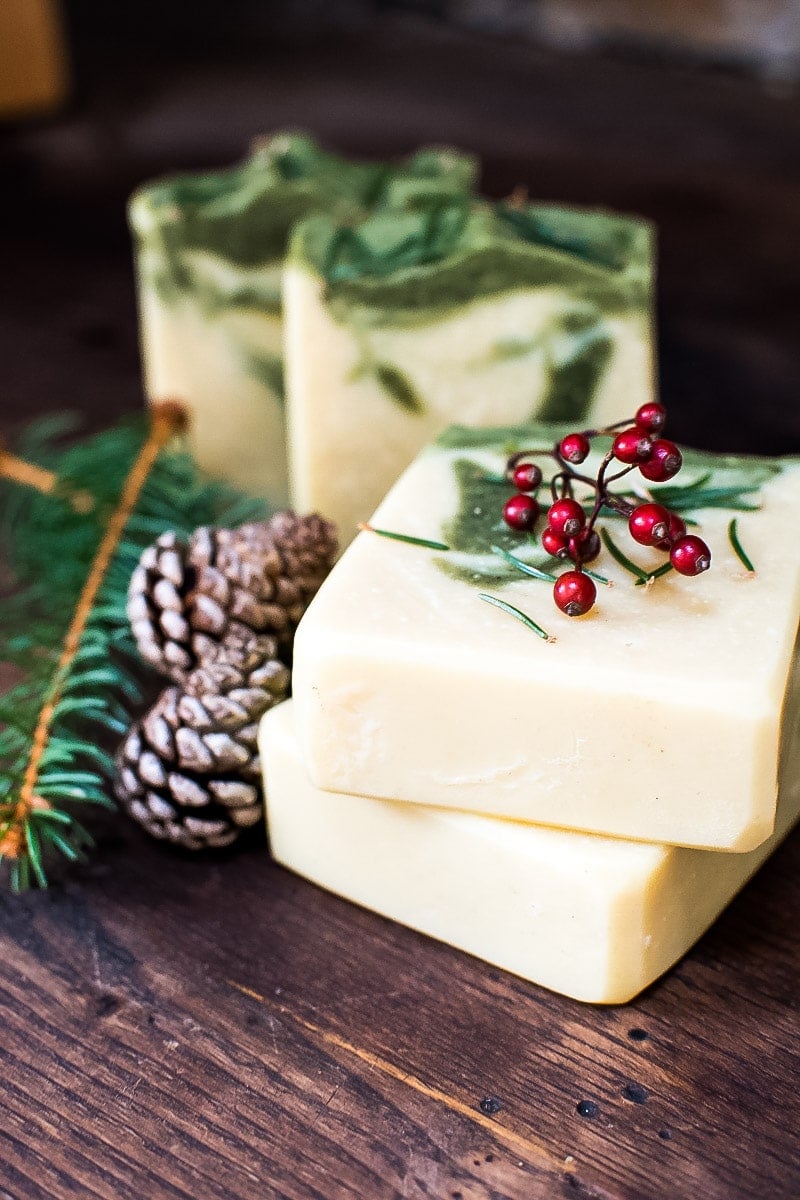 Here are some more soap recipes for you to make now that you know the basics: 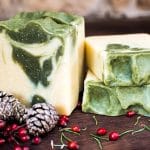 The longer you cure this soap the better. Because of the soft, liquid oils, I recommend curing for at least 8 weeks before using.
Previous Post: « Persimmon Champagne Cocktail with Cinnamon and Sage
Next Post: 15 Persimmon Recipes: cakes, pies, jam, cocktails & more! »