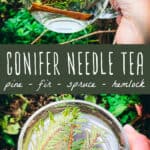 Making conifer needle tea is one of the best – and easiest – ways to use foraged conifer needles. Often called pine needle tea, this is a wonderful and simple way to use pine or other conifer needles medicinally. Ease your mind and heal your body with this delicious conifer tea! 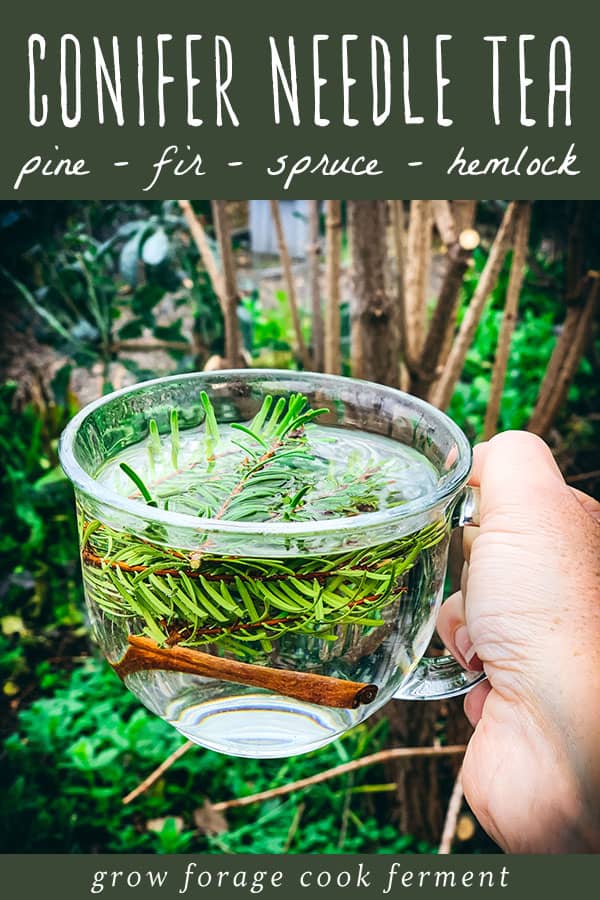 What is Conifer Needle Tea?

There are many edible and medicinal uses for foraged conifer needles, and making a tea out of them is a wonderful use of their powers.

Often called “pine needle tea,” this warming drink is simply made with foraged conifer needles steeped in boiling water in order to ingest this lovely flavored and health-beneficial tea.

The aromatics of this tea alone will help you feel calm and comforted, just like you’re walking through a forest.

The best part is, your health also benefits from drinking conifer tea! It’s truly a tea to heal your body and mind. 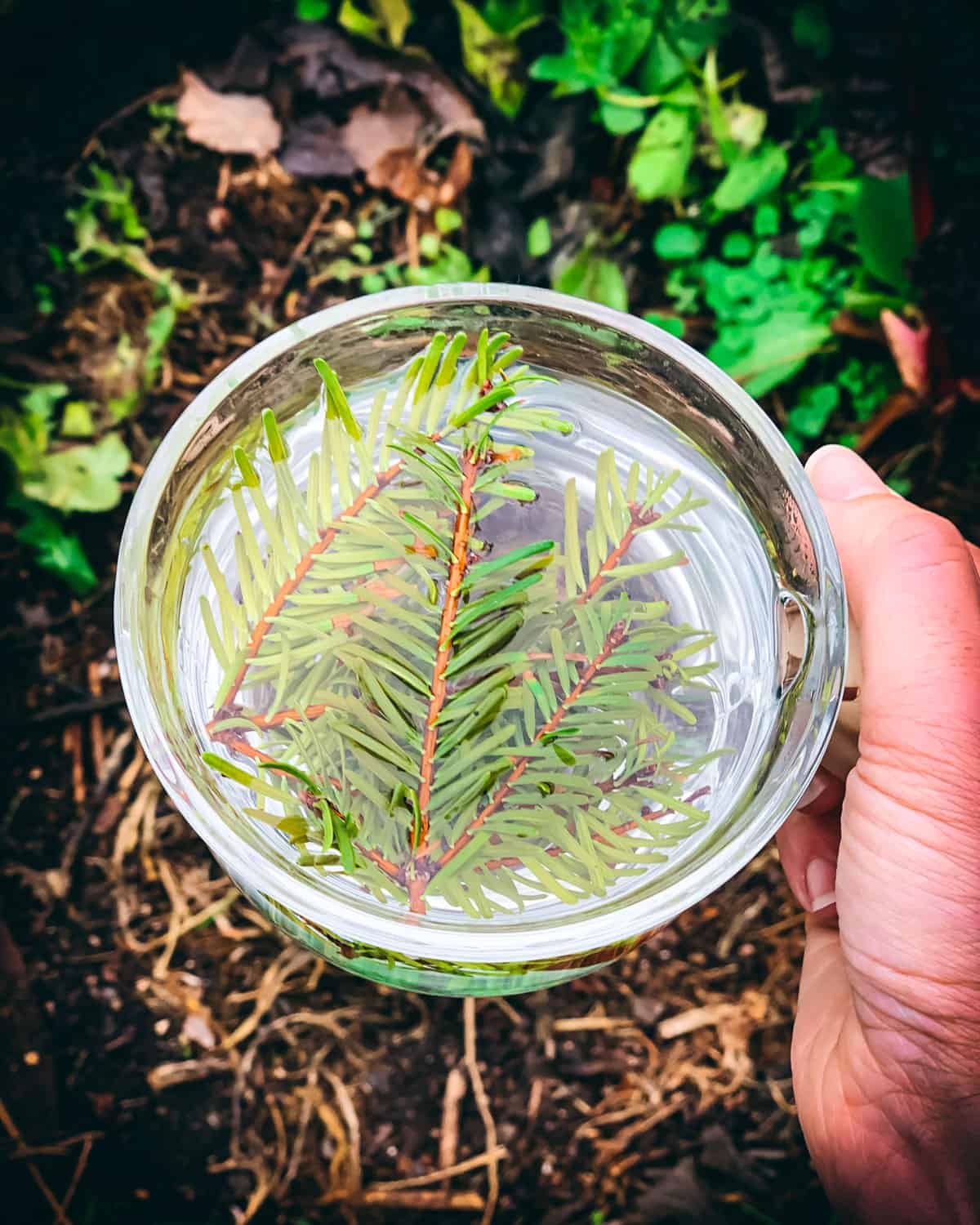 Types of Conifer Needles That Can be Used for Tea

Most conifer and pine trees can be foraged year-round, so are perfect to gather during the fall and winter when other plants are sparse.

It’s important to properly identify any tree that you are wanting to use for tea or anything else.

The main conifer trees to avoid for consumption is the Yew family because they are highly toxic.

Find more in-depth information in these two posts: how to identify conifer trees and foraging for pine needles.

Feel confident correctly identifying and foraging conifer and pine needles with this guidebook. 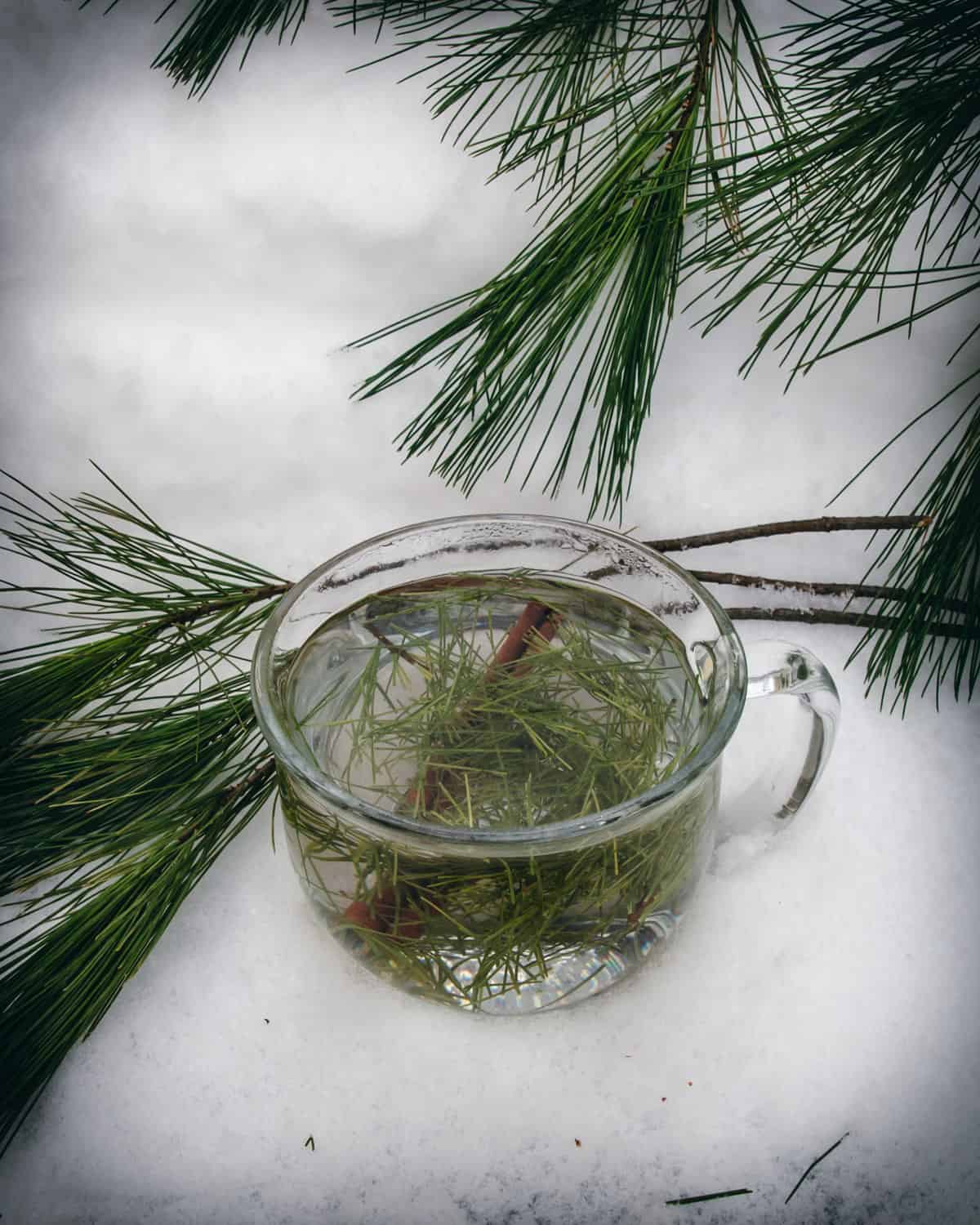 Pine Needles to Use for Tea

While most species of pine needles are safe to use for tea, there are a few varieties that you may want to avoid, especially if you are pregnant.

Ponderosa pine (Pinus ponderosa) and lodgepole pine (Pinus contorta) are not recommended to be used internally by pregnant women as there is a chance that they could cause miscarriage in large doses.

That said, ponderosa pine has been used medicinally by Indigenous Americans for hundreds of years.

Norfolk Island pine (Araucaria heterophylla) is another possibly mildly toxic conifer tree (it is definitely toxic to pets), but it is not actually a true pine.

Fir Needles to Use for Tea

As far as my research has shown, all fir trees have edible needles.

I will also say that Douglas fir (Pseudotsuga spp.), while not a true fir, is an excellent choice for tea making!

Try this recipe for fir needle forest chai for a different twist on fir needle tea! 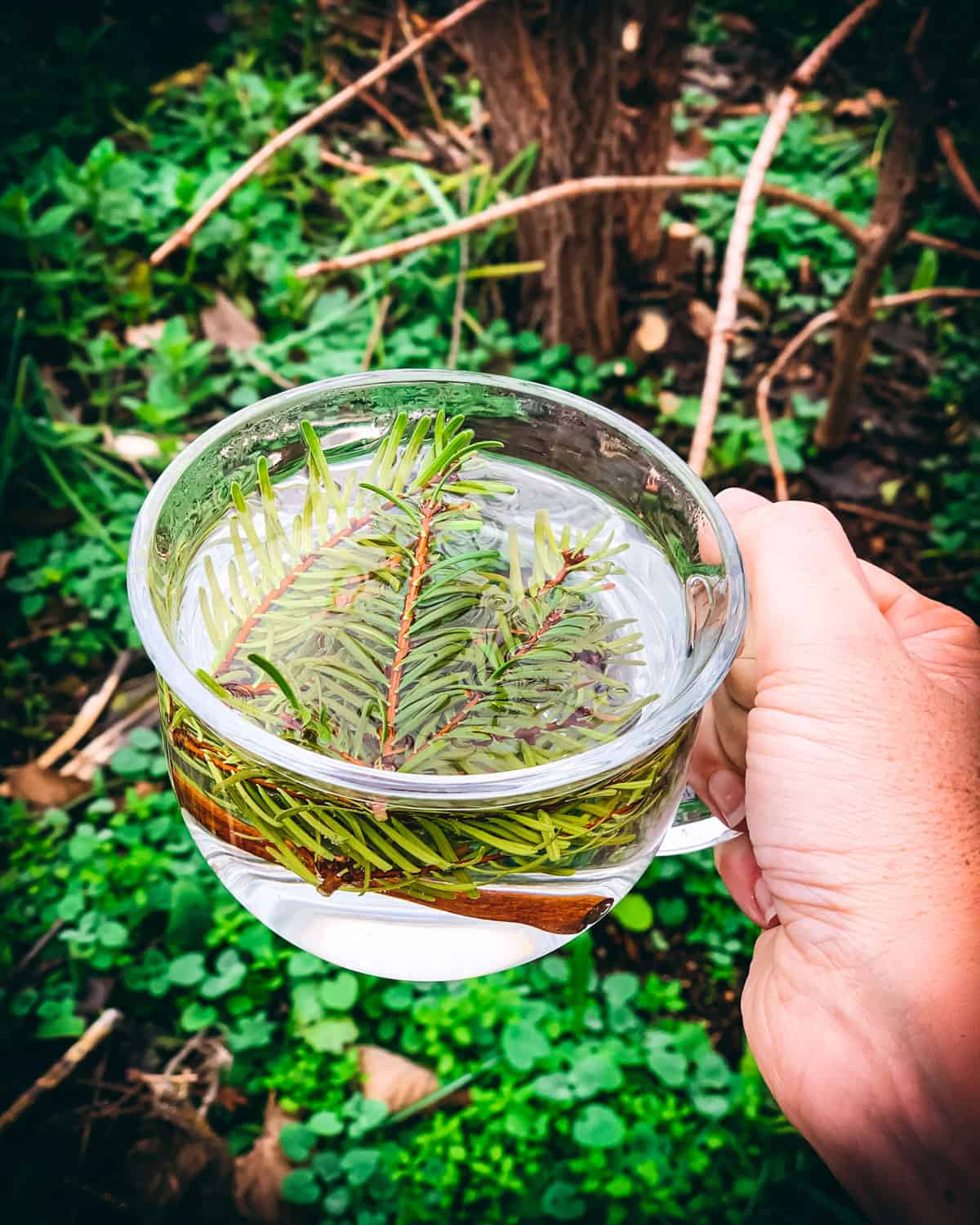 Spruce Needles to Use for Tea

Again, as far as my research, all spruce trees have edible needles. In fact, spruce tips in the springtime are a wonderful treat! I love making spruce beer with them.

Hemlock Needles to Use for Tea

Hemlock tree needles are edible and can also be used for tea, though not to be confused with poison hemlock which is a highly toxic plant and not a tree.

Other Conifer Needles for Tea

I would avoid making tea from most cedars and junipers (but many juniper berries are ok to use) as many of them have toxic compounds if used internally in large amounts.

For any tree you’d like to use be sure to properly identify and check for edibility first!

How to Make Conifer Needle Tea

The first step is to correctly identify and forage conifer needles.

You will want to strip or snip the needles off the branch, and if they are really long (like many pines are), cut them into smaller pieces.

Place a spoonful of the needles at the bottom of a mug. 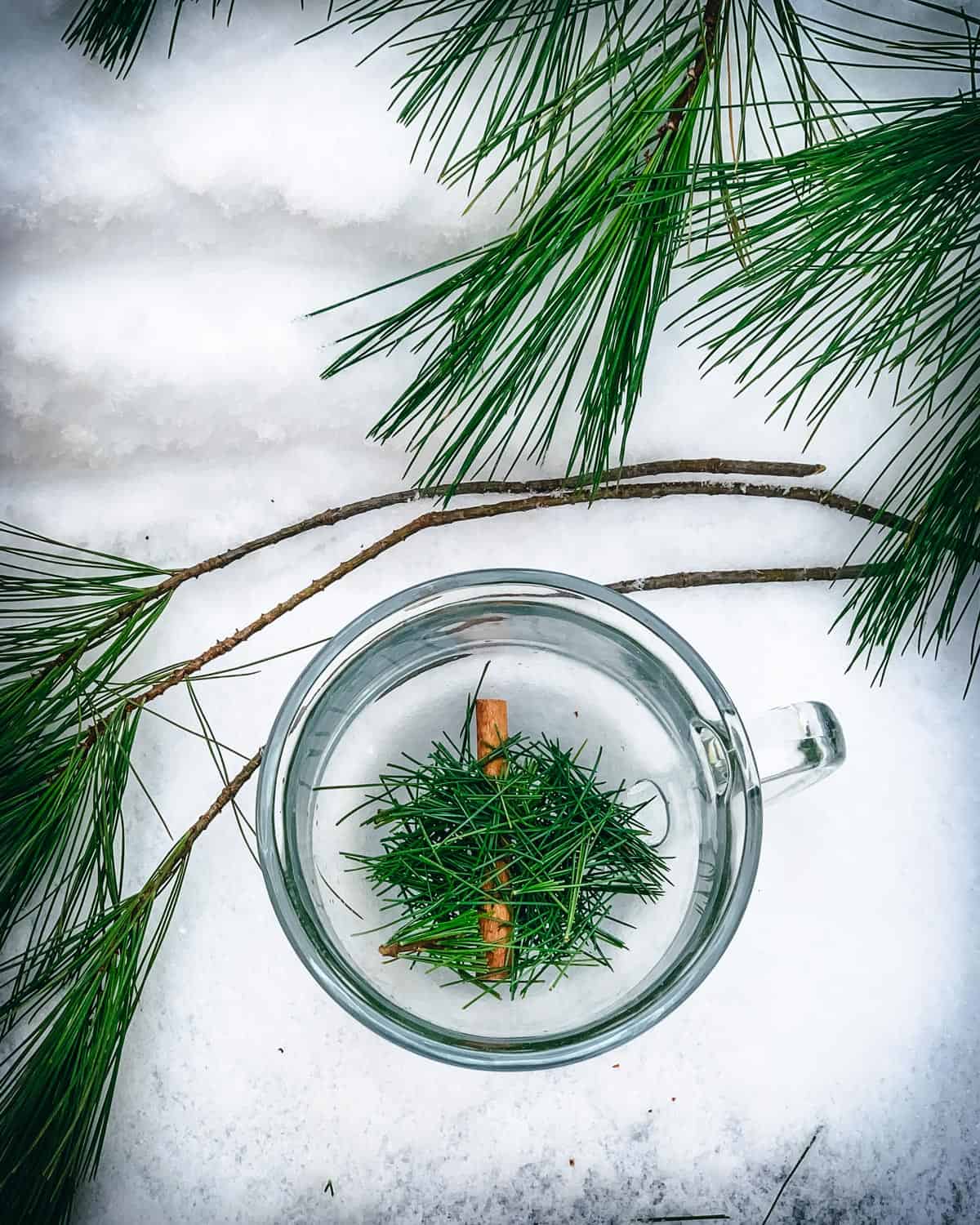 Pour boiling water over the needles and steep for about 5 minutes.

Feel free to use a tea strainer if you prefer! 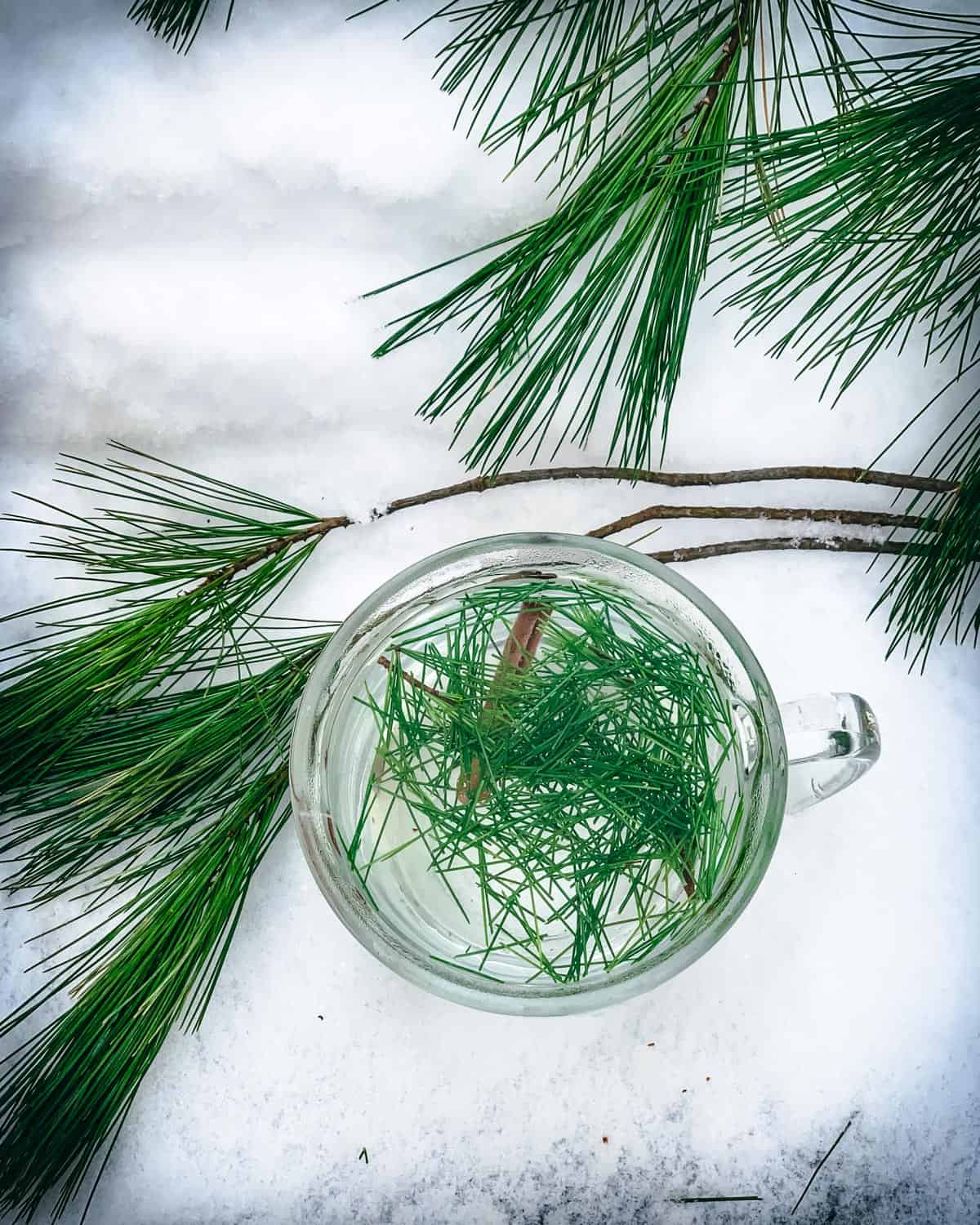 For a stronger flavored tea, boil the prepared needles in a pot of water for a few minutes, and strain them out as you pour into your favorite mug.

This method makes a lovely strong tea, but it does diminish the vitamin C content some.

In either method, you can add a cinnamon stick for some extra warmth of flavor. 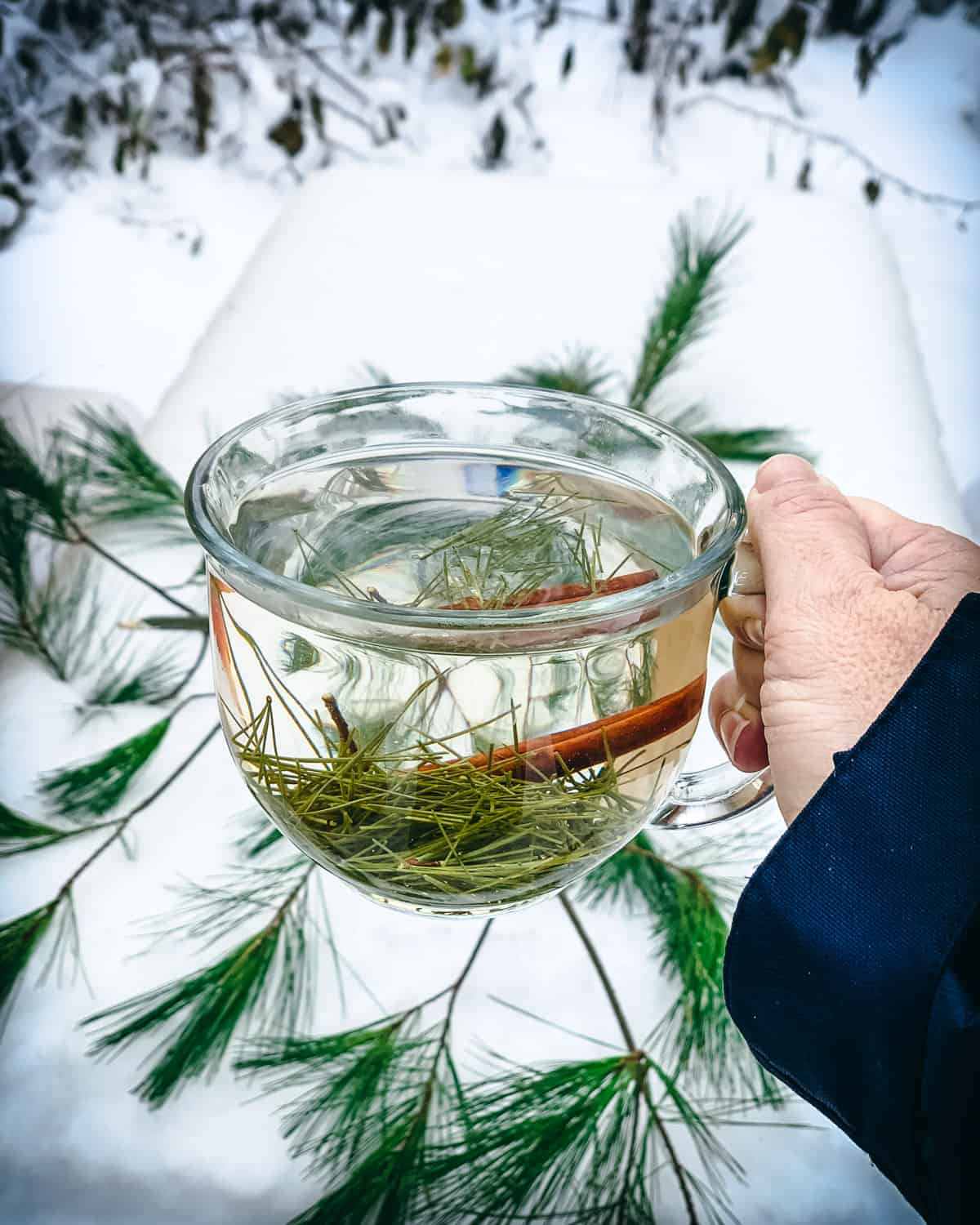 Traditionally consumed throughout winter to keep scurvy away, this delicious piney-tasting tea will give you a good dose of vitamin C.

Most pine and conifer needles can be used as an expectorant for coughs, to relieve chest congestion, and respiratory ailments. For extra throat soothing, add some raw honey into this tea when needed.

Conifer and pine needles also have pain-relieving and antibacterial properties, which adds to the magical essence of this tea.

The aromas and flavor of this delicious tea will comfort and warm you, heal your body, and relax your mind! 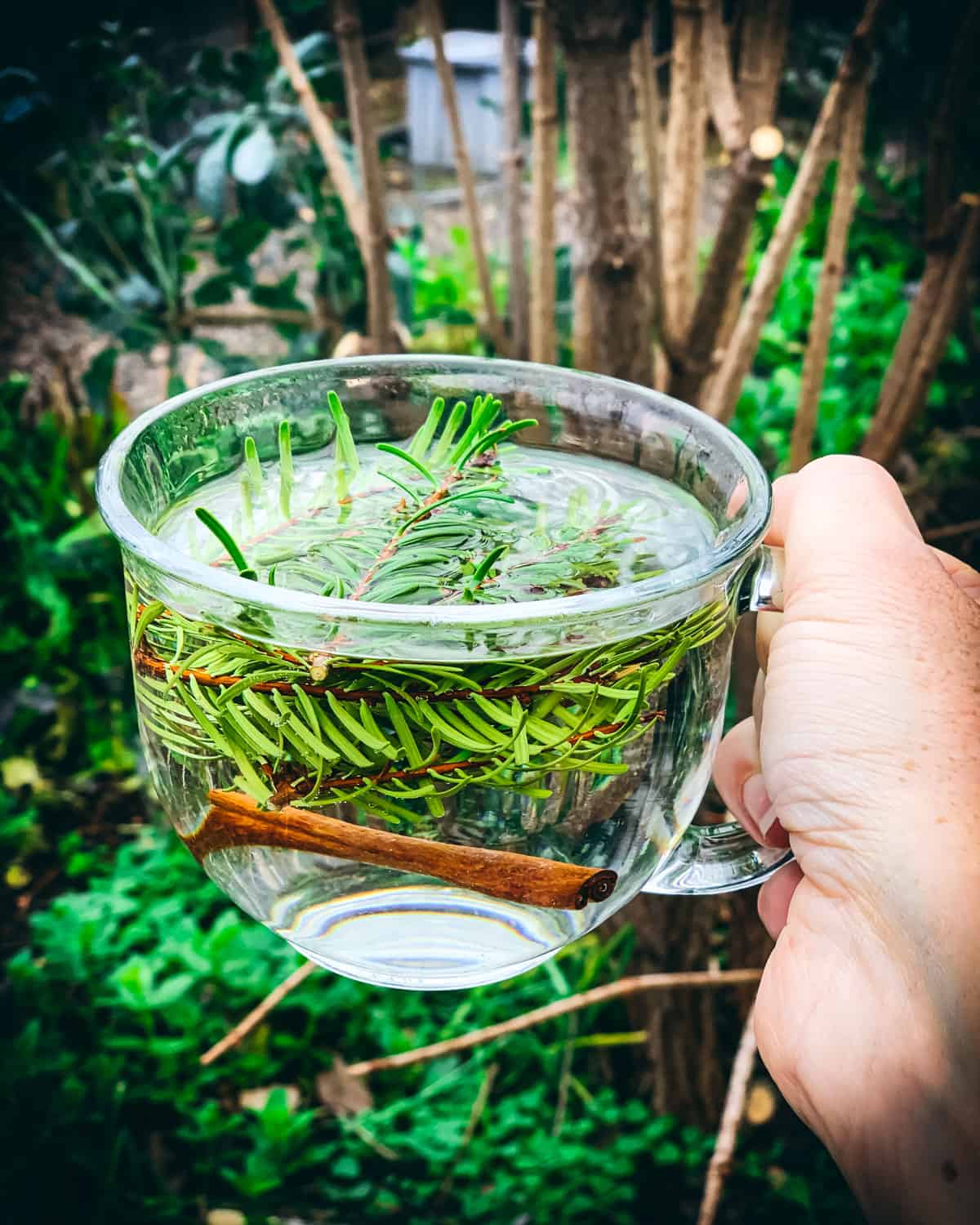 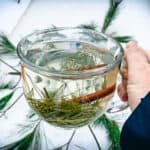