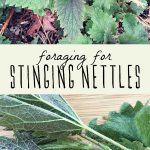 Foraging for stinging nettles isn’t as hard (or scary!) as it sounds. With just a few tips and precautions, you’ll be able to forage for and use stinging nettles. Learn everything you need to know about how to identify, forage for, safely harvest, and properly prepare stinging nettles for use in edible recipes and herbal remedies. 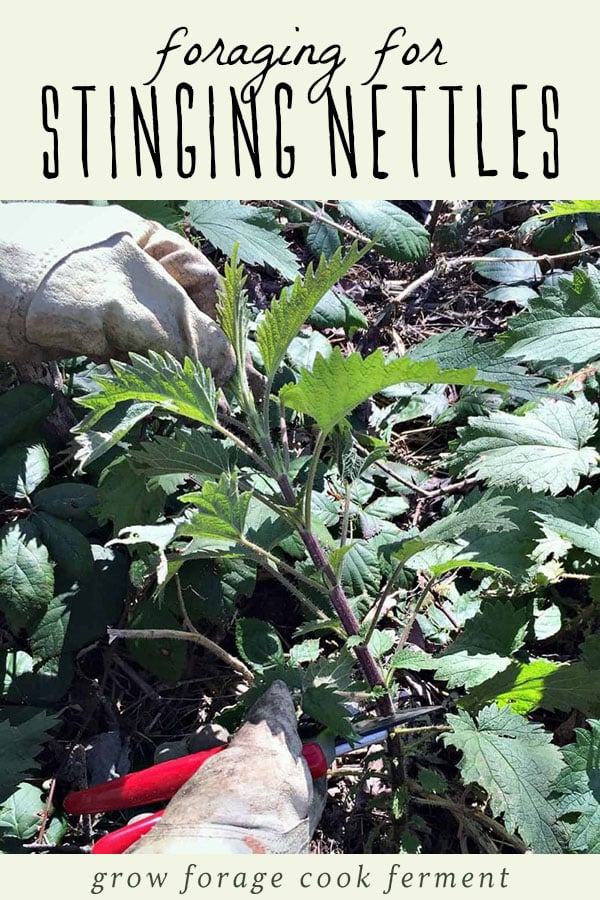 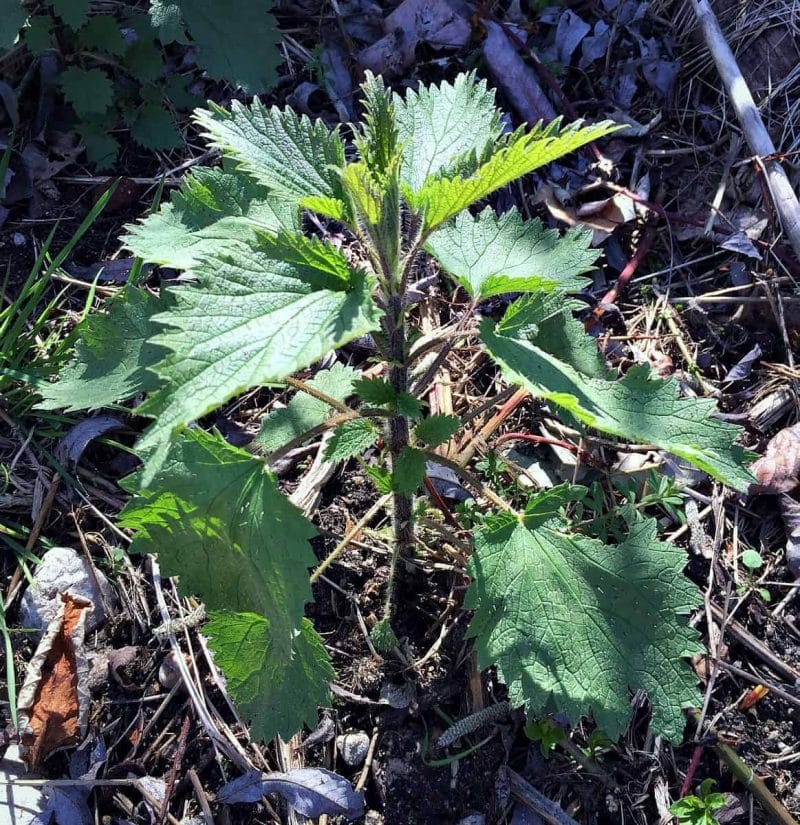 Yes, you can forage stinging nettle!

I’ve been interested in foraging for stinging nettles for quite a while now, but I have to admit that I was a bit scared because of the “stinging” part.

I mean, I know that you can (and should) wear gloves while collecting nettles, but then what? How can this plant that literally stings you be beneficial?

Well, clearly I had a lot to learn, because after some research I’ve found that stinging nettles are one of the most nutritious edible and medicinal wild plants out there.

You just have to be a little careful while collecting and preparing, but after that it’s all good – and good for you!

Related: What to Forage in Spring: 20 Edible and Medicinal Plants and Fungi 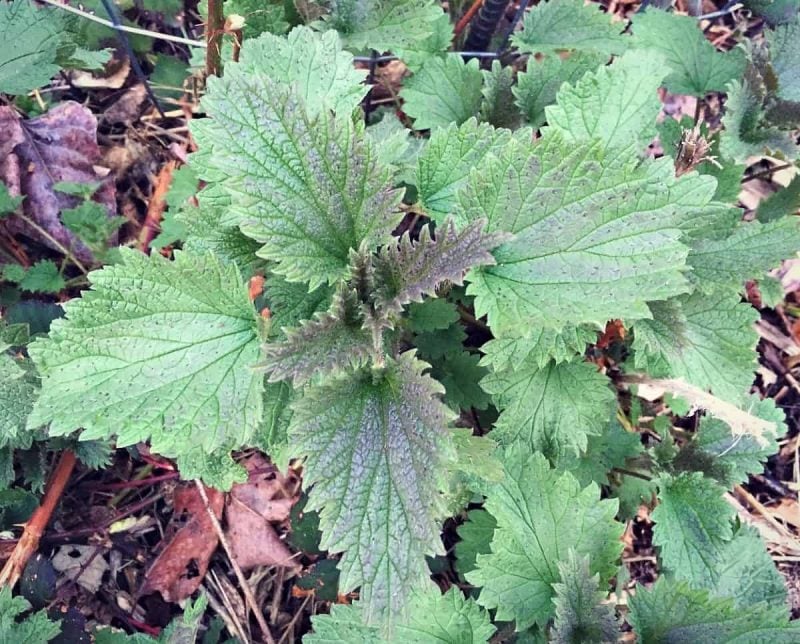 Stinging nettle (Urtica dioica) is a tall perennial plant with opposite serrated leaves that are triangular or heart shaped and a square stem. Tiny green flowers grow in long clusters.

Stinging nettles are fairly easy to identify, but if you’re unsure you can always give them a little touch to find out for sure.

The funny thing is that they won’t always sting you right away, especially if you grab them hard, or with rough and calloused fingertips.

A light brush with the back of your hand, though, and you’re likely to feel it for sure. It took me a couple of tries to get the sting, but when it happened I knew it!

Turns out it wasn’t that bad, but I can see that if you were walking through a field of nettles in flip flops it wouldn’t be pleasant!

The sting did persist for several hours, although it was more annoying than painful. Be aware that some people have a much stronger reaction to the sting.

Keep in mind that the stinging hairs cover the plant, but are the most dense on the stem.

Stinging nettle has no toxic look-alikes. Wood nettles are closely related and are also edible.

Note that purple dead nettle is a totally different plant than stinging nettle. It is also edible and medicinal and doesn’t have a sting at all! 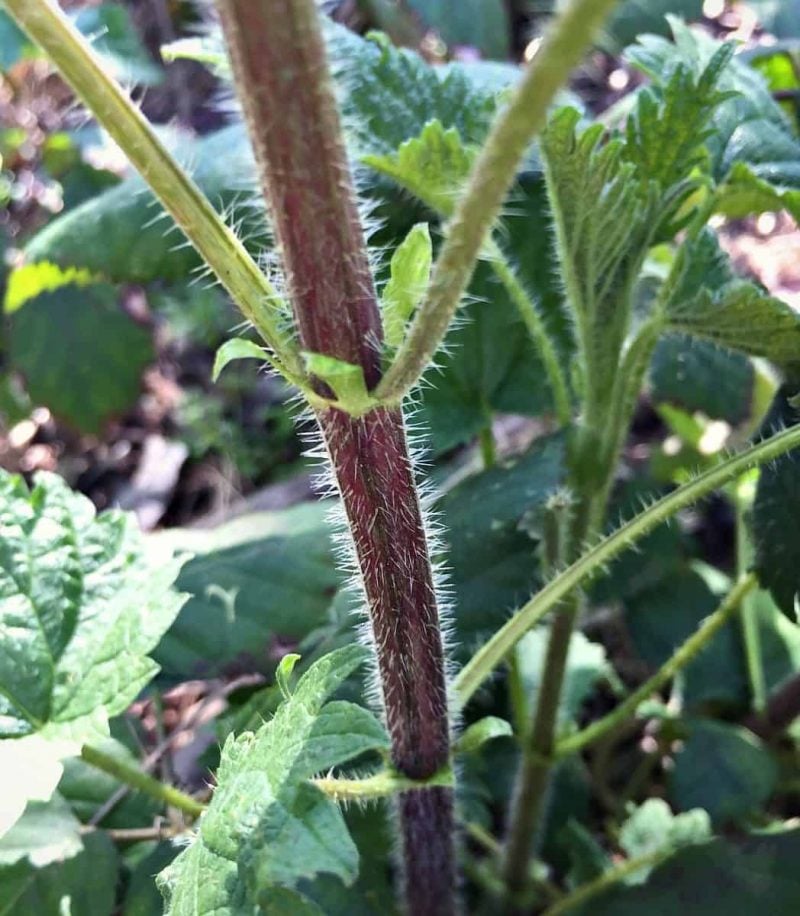 Where to Find Stinging Nettle

Finding stinging nettle is usually quite easy, and they grow in every Canadian Provence and US state, with the exception of Hawaii.

Stinging nettle grows particularly well in the Pacific Northwest because of all the rain we get here, and March through May are the best time to go looking.

Nettles tend to like stream banks, waterways, and disturbed areas. They are common in damp and fertile soil.

I even found a few among some thick blackberry brambles. 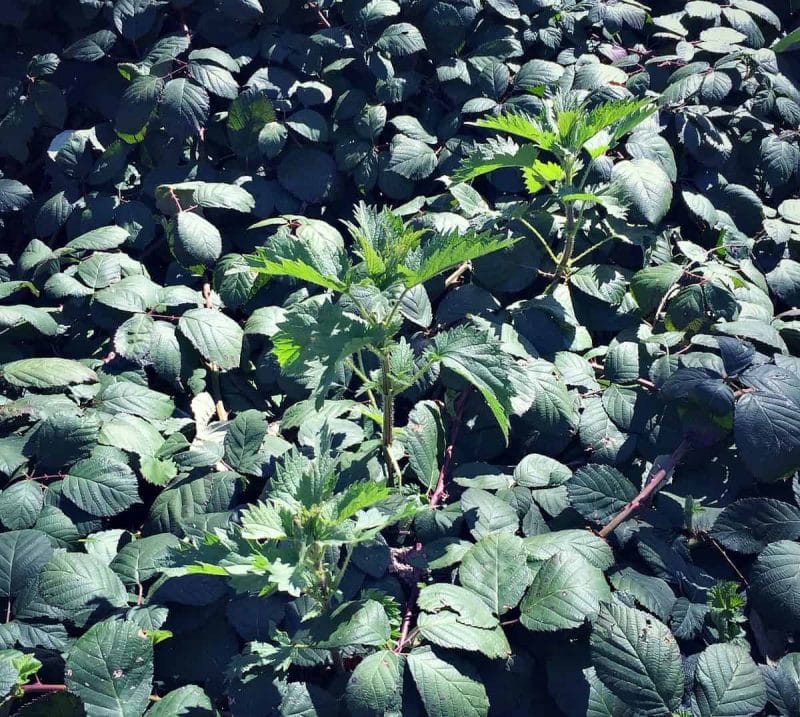 First, be sure that you are harvesting nettles in a clean location that is free from toxins, pesticides, or road runoff.

It’s best to harvest nettles when they are young, before they flower and set seed.

Definitely wear gloves while collecting to avoid the stinging hairs as much as possible! 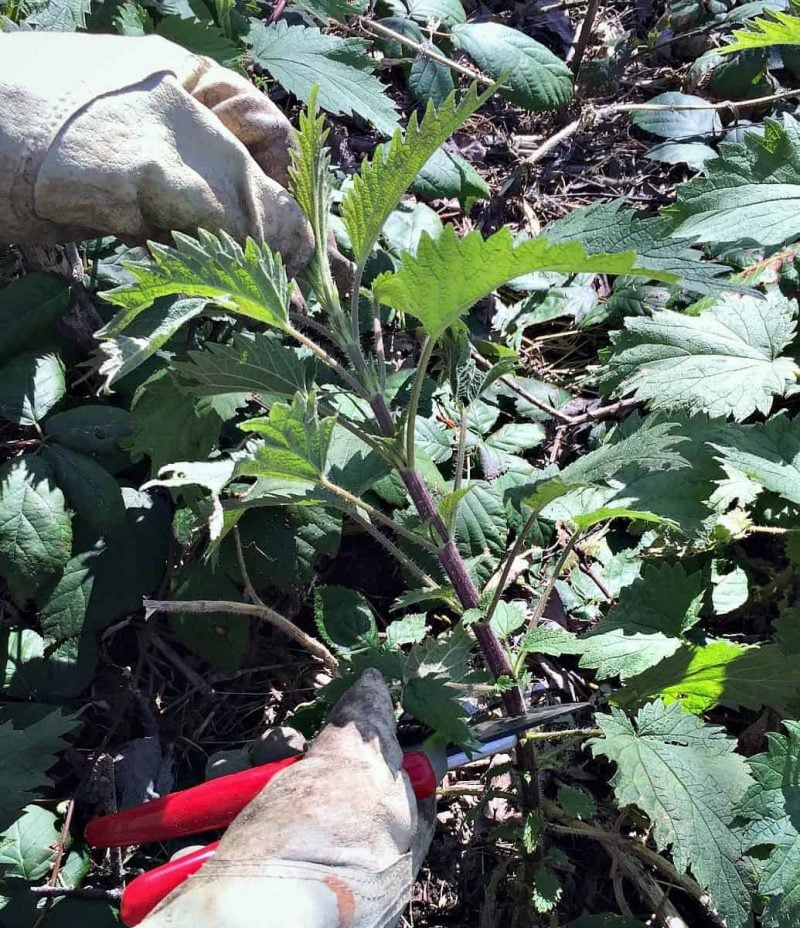 The real question is, why would you even want to collect stinging nettles?

Firstly, they are a very nutritious food. Stinging nettles must be steamed or blanched in boiling water first to dispel the sting, but after that you can eat them like any green.

It’s best to use the most tender tips of the plant for cooking. The older leaves and stems can be tough and stringy.

They are wonderful sauteed in butter, or you can even turn them into nettle pesto! (If foraged pesto is your thing you can also try chickweed pesto or dandelion pesto!)

Nettles are an awesome superfood, and they have a large amount of many vitamins and minerals. They are particularly high in vitamins A and C, iron, potassium, manganese, and calcium.

Try this refreshing stinging nettle-ade for a tasty and nutritious foraged drink!

See my post with 40+ Stinging Nettle Recipes to get more ideas! 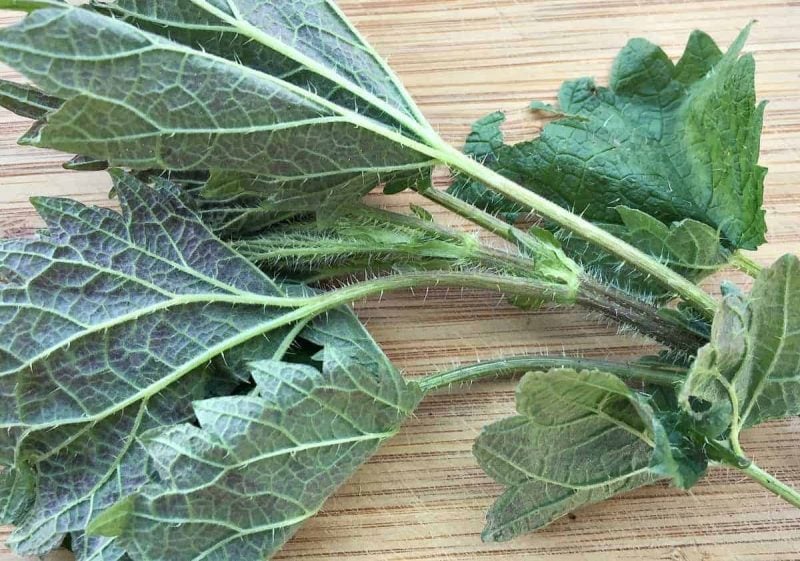 Nettles are also a potent medicinal plant. They are commonly used for kidney and bladder problems, including urinary tract infections.

Stinging nettles are also known as an all around tonic for women’s reproductive system, and are often used when trying to conceive, as well as throughout pregnancy (check with your doctor or midwife before using it during pregnancy).

Because of their high concentration of minerals, nettles are commonly used for bone ailments such as arthritis and osteoporosis.

Nettles are also excellent for the hair and scalp! It is a common ingredient in herbal hair care products. Try this nettle vinegar hair rinse. 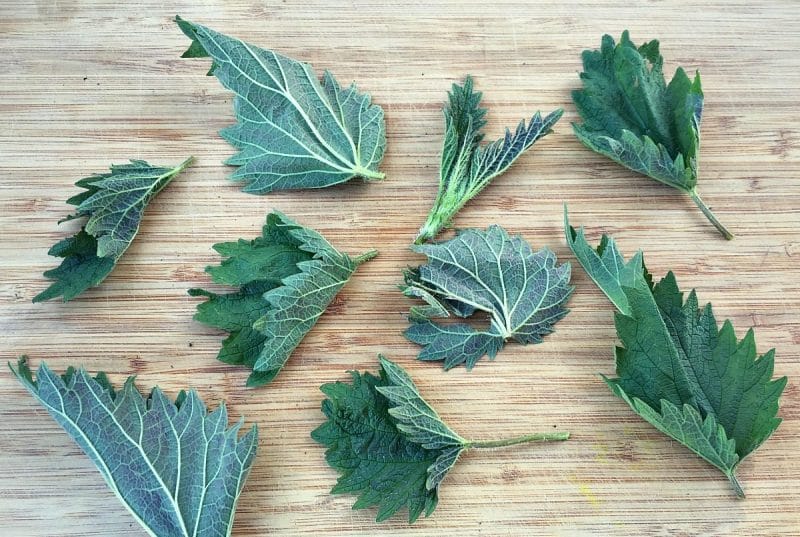 When used medicinally, nettles are often dried and made into a tea, or even better, as a mineral rich nettle infusion.

Foraged nettle leaves can be easily dried on a drying screen or in a dehydrator. 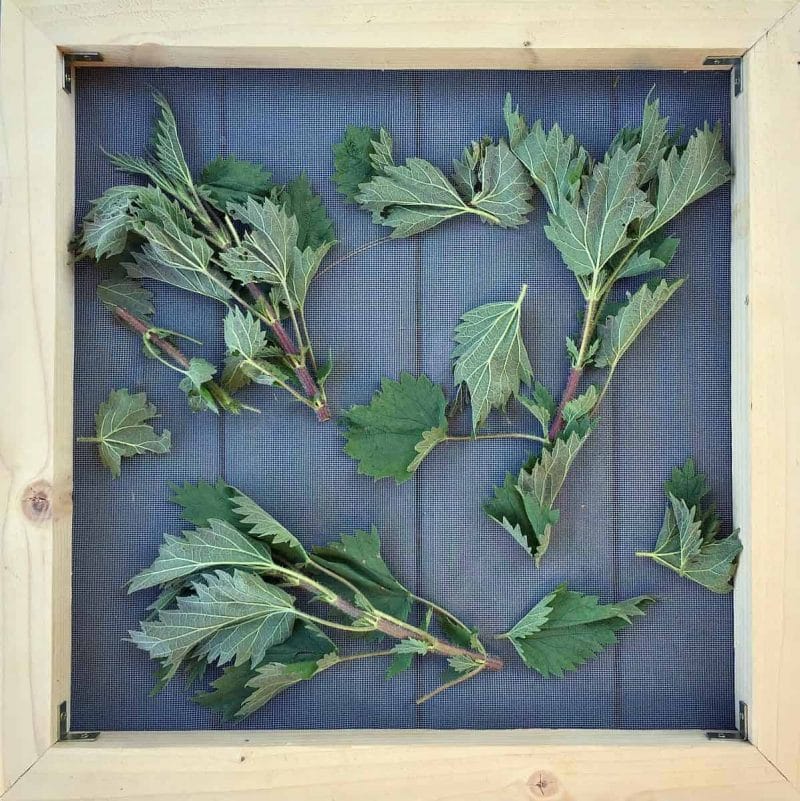 If you can’t find any nettles, or it’s the wrong time of year for collecting, you can purchase dried nettles from Mountain Rose Herbs.

I’ve also recently found out that nettles can also be used as fiber for spinning, animal feed, and as a type of rennet for cheese making. The possibilities seem endless!

I think some nettle pesto and nettle chips are in my near future.

I’m also very interested in the medicinal qualities of nettles and love drinking it as an infusion with other herbs. I have a recipe for oatstraw and nettle infusion in my book Healing Herbal Infusions.

Have you ever gone foraging for stinging nettles? If so, how have you prepared them?